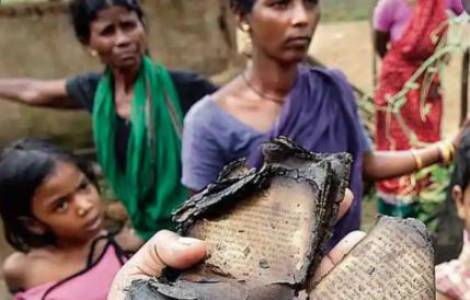 2021-10-27
Violence against Christians, "flagrant violation of the Constitution"

Bhubaneswar (Agenzia Fides) - Many Indian lay people, priests, nuns, academics, Christian leaders, lawyers and believers of other religions celebrated the 13th "Day of Remembrance" on August 25, dedicated to the victims of the massacres of Christians in Orissa 13 years ago. The program includes prayer meetings, liturgical celebrations, webinars, which intend to remember the ferocious anti-Christian violence campaign that took place in 2008 in Kandhamal, in the Archdiocese of Cuttack-Bhubaneswar, in the Indian state of Orissa (Odisha), in eastern India. The National Solidarity Forum, an association ofmore than 70 civil society groups, organized a webinar entitled "In Defense of Human Rights and Democratic Freedoms" which gathered thousands of participants across the country. "The state government of Orissa has completely failed to take action to prevent horrific crimes. It tried to portray the massacre as an tribal conflict, instead of recognizing the severity of the violence", said A.P. Shah, former judge of the Delhi and Madras High Court who was one of the speakers at the webinar.
"The government has set up two commissions, as is customary on such matters, but both have been ineffective," he notes. "The commission has not yet submitted a report on the matter. Almost 13 years later, there is not even a collection of documents . Such commissions, especially those set up after inter-community violence, tend to be bodies meant to temporarily appease public opinion, but usually do not produce anything useful", he said. "The way the violence was handled in Kandhamal is a textbook example of the failure of India's criminal justice system", he said. At the event, Shah also presented the first Kandhamal Human Rights Award to the People's Union for Civil Liberties, a Delhi-based NGO, and the individual award to Paul Pradhan, a lay Catholic from Kandhamal.
The former judge recalled that he was head of the “National People's Court” in Delhi in 2012: "we published a report which clearly concluded that the 'Kandhamal Carnage' was a planned act primarily directed against the Christian community, by a vast majority composed of Christian Dalits and Adivasi (tribals); and against those who supported or worked with the community".
He also noted "the worrying resurgence of communitarianism in India in recent years. Religious nationalism has come to the fore and is supported by powerful political forces. This ideology envisions a nation under Hindu rule, an exclusively Hindu nation. According to this view, Muslims and Christians are seen as foreigners and unwanted. This is a dangerous trend", Shah said.
John Dayal, a Catholic journalist who advocates the protection of human rights, also complains that "Violence against religious minorities such as Christians and Muslims is increasing in India. We must resist and denounce these hate crimes that go against the spirit of democracy, peace and harmony".
Many actions and programs are organized at a local and national level. "The innocent victims of Kandhamal should be given justice. Thirteen years have passed. Peace and harmony must be fostered in the minds and hearts of the people of Kandhamal and based on justice", said Lambodar Singh, a local leader.
A "Justice, Peace and Harmony Film Festival" took place in the Kandhamal region as part of the memorial ceremony. "Human beings have oppressed, mutilated, humiliated, killed their fellow men, with serious violations of human rights. One of the reasons for such human rights violations in India is based on identity. People have been killed, abused, lynched, harassed, raped and burned. Victims and survivors such as Dalits, Adivasis, fishermen, women, religious minorities and many other marginalized people are still fighting for their rights in India. The human rights violations against the people in Kandhamal took place in this context", said Sasi KP, director of the Film Festival. The film festival, which will take place from August 24th to 26th, is a reminder that "all marginalized groups and communities in India must stick together", emphasizes Sasi.
Kandhamal, one of the poorest districts in India, was the scene of one of the cruelest campaigns of indiscriminate violence in December 2007 and again in August 2008. The violence was apparently triggered by the murder of a leading Hindu representative, Swami Lakshmananda Saraswati. Hate propaganda by Hindu extremist groups blamed Christians for the murder, sparking a spiral of attacks against Dalit and Adivasi Christians in the district.
More than 360 churches and places of worship were attacked, 5,600 houses were destroyed or set on fire, more than 100 people were killed, and more than 40 women were raped or abused. More than 60,000 people had to leave their homes (to which they never returned) and live as displaced persons, while the education of over 12,000 children was interrupted. The victims and survivors have still not received justice. The Catholic Church in Orissa has always stood by the persecuted Christians with various initiatives and special aid programs. (SD-PA) (Agenzia Fides, 26/8/2021)

AMERICA/NICARAGUA - The Bishops recall "the basic and indispensable conditions in order to hold free, fair and transparent elections"

AMERICA/CHILE - Violence and polarization on the rise in view of the elections: the Bishops call for dialogue and responsibility