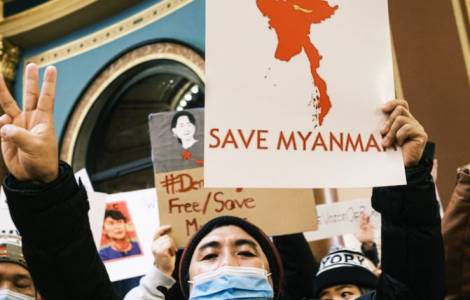 2021-10-12
Scalabrini and his passion for migrants, a key to interpretation for the contemporary world: towards the Scalabrinian Year

2021-09-21
Armenian Catholic bishops summoned to Rome to elect the Patriarch. Cardinal Sandri: may the Spirit of Christ help to overcome the logic of alignment

2021-09-18
Pope Francis to the Church of Rome: Mission is the work of the Holy Spirit, beware of the risks of a "do-it-yourself" Church

Belluno (Agenzia Fides) - The resistance of the Burmese people to the military junta continues inside and outside the country while, six months after the military coup of February 1, the "State Administration Council" (Sac, as the military junta is defined) declared itself a "provisional government" with General Min Aung Hlaing as Prime Minister. Abroad, the Burmese diaspora remembered Sunday, August 8, a historic date, known by its 4 numbers: 8.8.88. It was on that date, August 8, 1988, that students from the Yangon University of Arts and Sciences and the Rangoon Institute of Technology began to demonstrate against General Ne Win's regime. The student protests spread throughout the country with the massive participation of hundreds of thousands of monks, professionals and people of all classes and conditions. On September 18, the protests were bloodily suppressed by a military coup that imposed the "State Council for the restoration of Law and order". To commemorate that date, as well as the current situation, demonstrations were held in many countries where the Burmese diaspora is spread.
In Italy, the "Special Day for Myanmar" was held in Auronzo di Cadore, a town in the northern province of Belluno. The Catholic Church was at the side of the Burmese with a "special Mass for Myanmar" celebrated at 11 am in the church of Santa Giustina, parish of Villagrande (diocese of Belluno-Feltre). "It is a Mass that we wanted to celebrate given this difficult situation in Myanmar. For this reason, we welcomed the initiative of the Burmese community in Italy", said parish priest Fr. Renzo Roncada to Fides. Thuzar Lin, spokesperson for the Community residing in Italy, explains: "In the past we organized global days held simultaneously all over the world, in Italy it was held in Rome, Milan and Venice. On this occasion, each community has decided to independently celebrate this date that commemorates 8.8.88".
The choice of Auronzo di Cadore is not accidental: "The Municipality of Auronzo di Cadore has been with the people of Myanmar since the beginning of the coup d'etat", explains Thuzar, recalling the official declaration of the civil authorities for the release of the leaders and political prisoners and to end violence. In addition, the photo of Aung San Suu Kyi, the Burmese leader whose charisma emerged during the tragic events of 1988, was posted in the town hall. "Now - concludes Thuzar - the community of Auronzo di Cadore has given us the opportunity to organize this day for Myanmar and we are infinitely grateful to them".
The day was also an occasion to demand the release of political prisoners and to appeal to the international community to intervene more firmly. The dramatic health situation in Myanmar and how the coup military is exploiting the coronavirus pandemic as a weapon to stay in power was also put on the table. In the Church of Santa Giustina, a sale of items donated by Burmese living in Italy was carried out, the proceeds of which will go to humanitarian initiatives for Myanmar. (MG-PA) (Agenzia Fides, 9/8/2021)