AMERICA/GUATEMALA - Bishops: "the sudden dismissal of prosecutor Sandoval, illegal and arbitrary, has caused irreparable damage to the country" 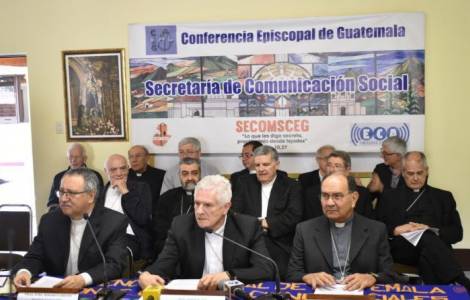 2021-07-27
Bishops: "the sudden dismissal of prosecutor Sandoval, illegal and arbitrary, has caused irreparable damage to the country"

2021-06-09
The US Vice President Kamala Harris advises against emigration: Bishops are calling for solutions to structural causes

2021-05-19
The Bishops: safeguarding and defending the family is the responsibility of civil authorities, but also of each family

2021-04-26
Beatification of the Martyrs of Quichè: "Inspired by faith in Christ, heroic witnesses of justice and peace"

2021-04-09
Centenary of the Archdiocese of Los Altos: "Evangelizing, forming disciples, bearing witness has been, is and will be our commitment"

Guatemala City (Agenzia Fides) - "The sudden dismissal of prosecutor Sandoval, according to authoritative men and women of law, was illegal and arbitrary. We embrace the protest of citizens in warning that this fact indicates a clear retrocession in work for an effective fight against corruption and impunity, which have caused so much damage to the integral development of the Country. Those who rejoiced at the removal did so because they feel safe and at ease when the regime of impunity consolidates". This was stated by the Episcopal Conference of Guatemala (Ceg), in a note signed by the President of Ceg, Mgr. Gonzalo de Villa y Vásquez, Archbishop of Guatemala City, and by the Secretary General, Mgr. Antonio Calderón Cruz, Bishop of Jutiapa, which bears the date of July 25. According to information gathered by Agenzia Fides, the Attorney General, María Consuelo Porras, dismissed on July 23, the Special Prosecutor against impunity, Juan Francisco Sandoval, who had denounced the lack of support from the Government and the obstacles posed at his work. Sandoval, known and appreciated internationally, left the country to avoid putting his safety at risk the following day, July 24. In their statement, the Bishops reiterate that "justice, prompt and impartial, and the investigation of crime, are a guarantee of freedom and democracy" and there is no greater danger that the mafias infiltrate the organs of the State. "Everyone knows that the process of administering justice in Guatemala has serious shortcomings, as we have repeatedly underlined - the Bishops write. The public prosecutor is, by law, the state body in charge of investigating and prosecuting the crimes committed. In recent years, he managed to investigate events that previously enjoyed total impunity, creating hope in citizenship and comfort for the victims. In this, the special prosecutor's office against impunity (Feci) played a fundamental role".
The Bishops denounce that "the sudden dismissal of prosecutor Sandoval has caused irreparable damage to the country": the important cases he was handling slow down, the public prosecutor's loss of credibility is enormous, the indignation of citizens will grow, social protests will increase and the level of conflict, the already poor management of the pandemic and the tortuous vaccination process will further complicate.
"As Bishops - they conclude -, we appeal to all the operators of justice, to those who are invested with authority in the various institutions of the country, to commit themselves more to the search for justice, to build peace as the greater good, to be courageous in recognizing their mistakes and not to lose the horizon of the common good, as the maximum expression of the sense of the State of Guatemala".
According to the Ministry of Health of Guatemala, as of July 26, the victims of Covid-19 in the country amounted to 10,112 while the positive cases since the beginning of the pandemic, in March 2020, have reached 352,584. Regarding vaccination, the same source states that 1,423,602 people have received the first dose and 303,303 the second. According to non-governmental organizations, the figures released on the dead and infected are much lower than reality. The population of Guatemala is 17,698,000. (SL) (Agenzia Fides, 27/7/2021)

AMERICA/NICARAGUA - Managua's "Justice and Peace" denounces the "manipulation, politicization and management" of the pandemic

AMERICA/COSTA RICA - The Bishops for the elections: "exercise the duty and the right to vote, which is an achievement of our democracy"