ASIA/MYANMAR - The Administrator of the diocese of Loikaw: the third wave of the pandemic overlaps political and social crisis 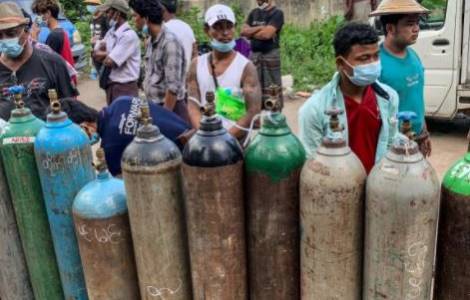 Loikaw (Agenzia Fides) - "In Kayah State and in our diocese of Loikaw, fighting between the military and the People Defense Forces (PDF) began in mid-May. They already caused more than 100,000 civilians to flee their homes. Many people have lost their lives, houses have been burned and churches destroyed. In this situation, the Diocese of Loikaw has been providing humanitarian assistance to all the displaced since May. We have assisted 60,000 displaced persons in the Dioceses of Loikaw and Pekhon, regardless of their religion and ethnic identity, with food aid, shelter and health care": this is how Fr. Celso Ba Shwe, diocesan administrator of the diocese of Loikaw, in Northern Myanmar, describes and explains to Fides the difficult situation in the territory. Since February 2021, with the military coup, subsequent national demonstrations, repression by the military and, finally, armed conflicts in some parts of the country "have caused profound suffering, violence, death and thousands of displaced persons", he recalls.
Fr. Celso Ba Shwe continues: "Due to the civil disobedience movement of health workers, the 500-bed state general hospital in Loikaw has almost stopped functioning. Since then, the Diocese of Loikaw has taken on the mission of providing health services to all. The former small Caritas clinic (Karuna), located on the cathedral complex, has been converted into a hospital that all people in Kayah and parts of southern Shan state rely on for health care. Due to the increase in the number of patients, all the buildings of the church have been converted into wards to receive patients. Surgeons, doctors, nurses, health service technicians, volunteers and religious offer their free help in the following services in these charitable works".
The Administrator notes "special care for inpatients and outpatients, with childcare services" is offered, but, "due to the limited space in the Karuna dispensary, we have opened two more dispensaries, one in the parish of Daungankha and the other in the parish of Phruso. In the first week of June, we opened another important dispensary in the village of Dorokhu where there are about 7,000 internally displaced persons who have taken refuge. "In this context, the pandemic has been spreading. In fact, the priest notes that, in addition to the conflict, "since the end of June there has been a third wave of Covid-19 and the number of infections is increasing day by day. In this situation, the urgent need for oxygen to provide Covid-19 patients is becoming crucial. In the entire State of Kayah there are only two Oxygen supply plants and among them, only one is the medical oxygen plant. The need for life-saving oxygen increases every day, and an additional oxygen production and supply facility is crucial to saving the lives of the ethnic communities of Kayah". "The military government - concludes Fr. Celso Ba Shwe - has no special plan to provide oxygen to Covid-19 patients. In this situation, we have formed a Municipal Committee to build an oxygen supply facility. As the diocese is fully committed to other humanitarian relief works, the Committee will manage the entire project. We have agreed that the Diocese of Loikaw will share part of the costs of this project. The estimated cost of the installation is about $ 190,000. We will raise the funds locally and we will also ask foreign donors for help". (PA) (Agenzia Fides, 20/7/2021)

ASIA/MYANMAR - After arrest by local militia in Chin State: priest and catechist return to pastoral service

AMERICA/CHILE - Violence against migrants: "We cannot allow a new epidemic, this time of hatred, racism and xenophobia"