AMERICA/COLOMBIA - The Bishops: "Real solutions are not necessary, on the contrary, we need each other" 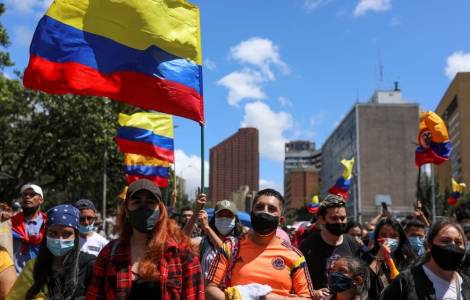 Bogota (Agenzia Fides) - "In the current moment that Colombia is living, let's walk together! Despite the fact that we feel we are in the midst of a storm, let us listen to the voice of the Lord, 'Do not be afraid' (Is 41,10)".
This is the exhortation of the Episcopal Conference of Colombia (CEC) signed by the new leadership elected during the recent plenary assembly (see Fides, 9/7/2021): Monsignor Luis José Rueda Aparicio, Archbishop of Bogota and President of the Episcopal Conference; Monsignor Omar Alberto Sánchez Cubillos, Archbishop of Popayan and Vice President, and Monsignor Luis Manuel Alí Herrera, Auxiliary Bishop of Bogota and Secretary General.
In view of the protests called for July 20 in several Colombian cities, which coincide with the start of the new legislature of the Parliament, on the same day of the anniversary of independence from Spain, the authorities have announced the implementation of a plan by the security forces to prevent violence and vandalism. The National Strike Committee ("Paro"), the main organizer of the protests that have taken place in the country since April and which have resulted in deaths, injuries and destruction, announced that through the mobilization of July 20, it wants to demand from the government and the parliament a response to the serious humanitarian, social, political and economic crisis that the country is experiencing (see Fides, 24/5/2021; 7/6/2021; 17/6/2021). In their statement, dated July 18, the Bishops underline that "Christ calls us to recognize that everyone, as Colombians, are in the same boat. Then they reiterate: "Real solutions are not necessary; on the contrary, we need each other to re-establish the path of life, each contributing according to his capacities and talents: institutions, civil society and each person".
Grieving for the suffering of so many families, of the sick, of so many brothers and sisters who suffer from hunger and who have lost everything, of so many young people who have lost hope for the future, of those who have seen their rights violated, the Bishops invite "to look to the Lord of life, to feel the intimate embrace of his mercy, and the need to continue building together the project of a just and inclusive nation". In the conclusion of the statement, the Bishops once again underline that "it is detrimental to us to continue to deepen the paths of hatred and division" and, quoting Pope Francis in the Encyclical Fratelli Tutti, invite us to to overcome what divides us without losing the identity of each one, and exhort us to unite in prayer so that God transforms "this moment of conjuncture into a story of salvation for all". (SL) (Agenzia Fides, 19/7/2021)