AMERICA/BRAZIL - "Defend threatened lives, rights not respected and support the reestablishment of justice": the Bishops' requests 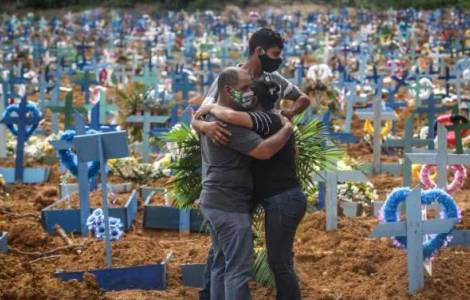 2021-09-22
Qualified missionary animators: course to deepen the history and objectives of the Mission Day, Missionary Month and the Missionary Campaign

2021-09-06
Independence Day "should make us recognize that we are all brothers, including those with whom we disagree"

2021-08-06
"Violence generates violence", the Catholic community calls for an end to clashes between police and Roma

Brasilia (Agenzia Fides) - Brazil has more than 537,498 victims of Covid and 19,209,021 cases, according to the report of the press consortium and data from the Department of Health, with an average of 1,270 deaths per day. The Brazilian population totally immune to Covid, that is to say having received the second dose or the single dose depending on the type of vaccine against the disease, barely exceeds 15%. There are 29,210,770 who took the second dose and 2,907,947 who took the single dose, for a total of 32,118,717 people vaccinated (15.17%). A year after the general elections in Brazil, incumbent President Jair Bolsonaro is experiencing his worst moments. Protests against him continue as the prosecution continues to gather evidence of overpayments and corruption in acquiring doses of India's vaccine, Covaxin. "Bolsonaro Out" is the slogan that resonated in 315 cities in Brazil during the third demonstration in five weeks, calling for the president to leave the scene. News agencies report that a majority of Brazilians support the prosecution of President Jair Bolsonaro, for the first time according to a Datafolha poll released on Saturday July 10. According to the poll, 54% of citizens support a measure proposed by the Chamber of Deputies of Congress aimed at opening an impeachment process against the president. Bolsonaro's popularity has therefore been hit hard and the results seem to show that more and more citizens are turning their backs on him. The latest poll indicates a shift in public opinion, compared to a previous poll last May, which showed a significant gap between supporters and opponents of an impeachment of the head of state. The National Conference of Bishops of Brazil (CNBB) published a note on Friday July 9, sent to Fides, on the current situation in Brazil. The document reaffirms the need to "defend lives at risk, rights not respected and to support the restoration of justice, while upholding the truth". According to the CNBB, Brazilian democratic society is going through one of the most difficult periods in its history. "The tragic loss of more than half a million lives is compounded by allegations of embezzlement and corruption in the fight against the Covid-19 pandemic", reads the Bishops' note. The CNBB, "supports and invites the institutions of the Republic so that, under the eyes of civil society, without exclusion, they implement procedures favorable to the free and impartial investigation of all complaints, with consequences for whomever, with a view to the immediate political and social correction of deviations". (CE) (Agenzia Fides, 15/7/2021)

AMERICA/PANAMA - The Archbishop of Panama: "We have a corrupt society and no one takes the first step to transform it"

AMERICA/GUATEMALA - Bishops: "the sudden dismissal of prosecutor Sandoval, illegal and arbitrary, has caused irreparable damage to the country"