AMERICA/COLOMBIA - The Bishops at the end of the Assembly: "It's time to walk together" 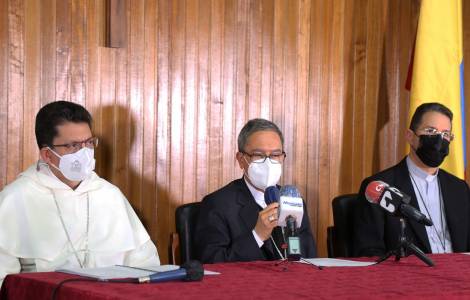 Bogotà (Agenzia Fides) - "Let us make our own all the voices that cry out for a supportive and just country. Our gaze is confident even knowing the serious problems that afflict us and all the efforts we must make to find effective answers for the future of our nation which urgently needs realistic actions in which all the social protagonists commit themselves". This is what the Bishops of Colombia write in the message published at the end of the Plenary Assembly of the Episcopal Conference (CEC), during which the reality of the country was analyzed, the new leadership elected and the pastoral guidelines for the next three years were drawn (see Fides, 7/7/2021).
In the message, sent to Fides, the Bishops thank the God of Life who allowed them to meet in person to celebrate this Assembly and renew the fraternal communion of the Church, which walks and serves the entire Colombian nation.
In the liturgical celebrations they presented "the pains and hopes of the regions" to the Father and prayed "for the hundreds of thousands of deaths due to the pandemic and for their loved ones who mourn them".
Finally, the Bishops exhort: "it is time to walk together, to listen to each other, to participate, to serve us with love", quoting Pope Francis who affirms that "the path of synodality is the path that God expects from the Church of the third millennium". During a press conference, Monsignor Luis José Rueda Aparicio, Archbishop of Bogotá, new President of the Colombian Bishops' Conference, mentioned three criteria to be followed in the next three years, to respond to the current needs not only of the Church, but also of the country, on the way towards reconciliation: permanent communion, truth and respect for life. "I ask the Lord - he said - that we, who have been appointed to accompany the Church's journey, hand in hand with the various protagonists and in different environments, can be servants of Christ Jesus who shows himself to us as the way, truth and life".
Monsignor Omar Sánchez Cubillos, Archbishop of Popayan, new Vice President of the CEC, observed that the Church has never been absent from the commitment to peace, through the various actions carried out by Bishops, parish priests, men and women religious and laity throughout the national territory, "in every parish of this Colombia there are peacemakers" he underlined. "One of the tasks of this responsibility that the Lord entrusts to us today, through the CEC, is to think of the country and help it to get out of this conflict that afflicts it. If we do not resolve the issue of peace, we will be blocked by many pains, with many fractures and, in the end, we will not see the country we deserve". An invitation to young people to walk in a synodal way with the Church, being an active, dynamic and even critical part, came from Monsignor Luis Manuel Alí Herrera, Auxiliary Bishop of Bogotá, appointed Secretary General of CEC, who also highlighted that the the Church is hurt by the nearly 110,000 deaths that the pandemic has left in the country, including several members of the Church. "Like all Colombians - he said - we too have had losses. We are aware of this reality of lived suffering. We therefore want to be the Church that accompanies, that is Samaritan, very attentive to the situations of pain of many families". (SL) (Agenzia Fides, 9/7/2021)

ASIA/MYANMAR - "It's time to save lives": Cardinal Bo's appeal for "Martyrs' Day", in the midst of the pandemic