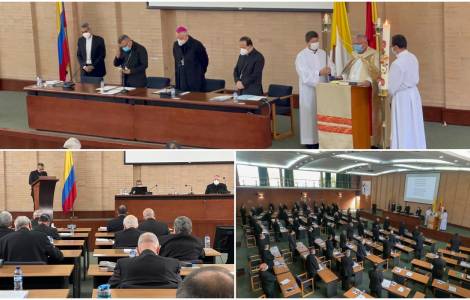 Bogotà (Agenzia Fides) - The Archbishop of Bogotá, Monsignor Luis José Rueda Aparicio, has been elected President of the Episcopal Conference of Colombia (CEC) for the three-year period 2021-2024. The election took place yesterday, Tuesday, July 6, within the framework of the plenary Assembly of the Colombian Episcopate held in Bogotá. Monsignor Rueda Aparicio succeeds the Archbishop of Villavicencio, Monsignor Óscar Urbina Ortega. The Colombian Bishops have also elected Monsignor Omar Alberto Sánchez Cubillos, Archbishop of Popayan, as Vice President and Monsignor Luis Manuel Ali Herrera, Auxiliary Bishop of Bogotá as Secretary General. After the election, the President and Secretary General of the Latin American Episcopal Council (CELAM), Mgr. Miguel Cabrejos Vidarte OFM and Mgr. Jorge Edoardo Lozano, sent a message to the Archbishop of Bogotá expressing their congratulations "for the appointment and for the trust that the Colombian Bishops have placed in him", confident of his "significant contribution to the pilgrim Church in Colombia". Extending their congratulations to the other elected, the CELAM presidency assures them of its prayers for the fulfillment of this important responsibility. The Plenary Assembly of the Episcopal Conference of Colombia (CEC) takes place from July 5 to 7, 2021, in the city of Bogotá, in person, following current health recommendations. There are three main objectives of the agenda: to discern the progress made in recent years and to share the various aspects of the reality of the regions; election of the new board of directors for the three-year period 2021-2024, of the presidents of the episcopal commissions and of the heads of the administrative and pastoral departments; to define the lines of action that will mark the path of the Colombian Church for the next three years. During the Assembly, the Colombian Bishops paid tribute to all consecrated persons - Bishops, priests, men and women religious - who died in the country due to the Covid-19 pandemic. A section of the website of the Bishops' Conference presents their faces, the circumscriptions or congregations to which they belong, the dates of their death and age. Although, as specified by the CEC, "we do not have a precise number of the Church members who died of Covid in Colombia, the report so far offered by the ecclesiastical circumscriptions and religious communities speaks of 148 deaths". There are 4 Bishops, 69 priests, 30 men and 45 women religious throughout the country. In this way, "with Christian hope and the certainty of the resurrection, the Church wants to remember each one of them by gathering their names and recognizing the work of dedication they had towards the Church and society". (SL) (Agenzia Fides, 7/7/2021)