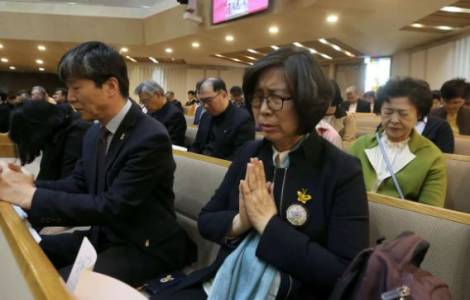 2021-11-26
A relic of St. Andrew Kim Tae-gon donated to Burkina Faso, a sign of missionary communion

2021-11-18
Initiatives for the benefit of the poor and the homeless: "It is above all the loving care that nourishes every person"

2021-10-30
The barbed wire cross, a symbol of peace and reconciliation

Seoul (Agenzia Fides) - Park Jie-won, head of South Korea's intelligence services has stated that he is working for a possible visit by Pope Francis to North Korea. As confirmed by local sources of Fides, when participating yesterday, July 6, at a Catholic Eucharist in Mokpo, in the southern province of Jeolla, Park Jie-won, Director of the "National Intelligence Service" reported that he would meet with Archbishop Kim Hee-jung and the Apostolic Nuncio in South Korea, Archbishop Alfred Xuereb, to discuss Pope Francis' visit to Pyongyang. The mass Park attended was held at Sanjeong-dong Catholic Church in Mokpo, designated by the Holy See as a "minor basilica", the first church in South Korea to receive this title.
About 200 people attended the celebration presided over by Archbishop Kim Hee-jung, in compliance with anti-Covid measures. Park Jie-won was elected in the past to parliament representing the Mokpo constituency. He took over as head of the National Intelligence Service last July. He assumed the leadership of the National Intelligence Service last July. He was Presidential Secretary to President Kim Dae-jung (in office from 1998 to 2003, and Nobel Peace Prize winner in 2000) and, during his administration, played a key role in organizing the first inter-Korean summit between South Korean leaders and North Koreans in June 2000. In that administration he was also Minister of Culture, Sports and Tourism. Father Dinh Anh Nhue Nguyen, Director of Agenzia Fides and Secretary General of the Pontifical Missionary Union comments: "We are in spiritual communion with the Church in Korea and pray for peace and reconciliation on the peninsula. Together with all the Korean faithful, we wish that, if it is God's will, Pope Francis can visit North Korea to start a new era of peace. His visit would not be so much a point of arrival as a starting point for a time of reconciliation, harmony, unity, in the name of the Gospel. It would be a moment of grace and blessing for the entire peninsula".
In a recent interview with Agenzia Fides, the newly appointed Prefect of the Congregation for the Clergy, Mgr. Lazzaro You Heung-sik, currently bishop of Daejon, explained: "In October 2018, when the President of the Republic of Korea, Moon Jae-in was received in audience by Pope Francis, he delivered the Pope an invitation from Kim Jong-un, leader of the Democratic People's Republic of Korea, for a possible apostolic journey to that nation. The Pope then replied that he was available to visit North Korea, the moment he received a formal invitation from the authorities of Pyongyang. When I heard the news of the Holy Father's availability, I was really moved. Since then I have constantly prayed for the Pope's visit to North Korea to take place. Nearly ten million Koreans live in forced separation due to the division between the South and the North. The confrontation that exists on the Korean Peninsula is one of the greatest sufferings of humanity today. It is noteworthy that the area called “Demilitarized Zone” (DMZ) between the South and the North is ironically the most militarized zone in the world. I am convinced that a possible visit to Pyongyang could represent a turning point, which would allow us Koreans to dialogue and understand each other better, starting with small things and ending with big ones, and perhaps even reaching the reunification of the South and the North. In concrete terms, the Holy Father's mediation could be a propitious opportunity to put an end to the conflict, the result of mutual distrust between the two parts of the Peninsula which has lasted for too many decades. I pray and try to do what I can, in the hope that at least a small ray of hope will open up for mutual understanding, overcoming the current situation of tension and opposition.
Humanly, there seems to be little hope, but since God is omnipotent, I try, by praying to Him, to welcome all that can be useful to promote peace". (PA) (Agenzia Fides, 6/7/2021)