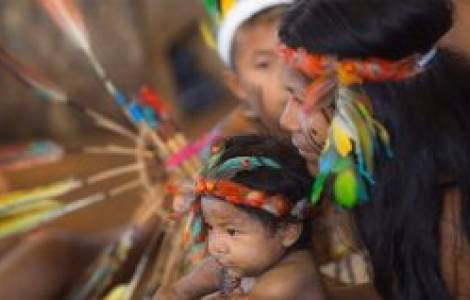 2022-12-09
"The defense of democracy is the right and duty of peoples and citizens": Dina Boluarte new President of the Republic

Amazonas (Agenzia Fides) - Under the domain www.queridaamazonia.pe, the new website of the Amazon Center for Anthropology and Practical Application is already operational. This web information portal represents the REPAM Pan-Amazonian Ecclesial Network in Peru and brings together the eight vicariates of the Peruvian Amazon in the same space to share projects, news, initiatives. "This website was created with the aim of making forest communities more visible and promoting 'vocations to the Amazon' in the Peruvian Church: awakening laypeople, men and women religious and priests who wish to come as missionaries to this beloved blessed land from God", reads the note sent to Fides by the Peruvian Episcopal Conference. With some very attractive graphics you can immediately see the list of the Apostolic Vicariates: the Vicariate of San José del Amazonas, Vicariate de Iquitos, Vicariate de Yurimaguas, Vicariato de Requena, Vicariate de Jaén, Vicariate de Pucallpa, Vicariate de San Ramón and Vicariato de Puerto Maldonado. Of the Vicariates there are data, photos and news that show the communities engaged in evangelization, in society and in mission with the most abandoned. Peru is the second country, after Brazil, with an Amazonian area of more than 70 million hectares (60% of the national territory), a population of 3,672,292 inhabitants, or 13% of the country's total population. According to INEI (National Statistics Institute), there are 51 Amazonian indigenous populations in the nation that represent 13 languistic families. As Pope Francis stated in Puerto Maldonado in January 2018, "States have seen the Amazon as an inexhaustible pantry of natural resources. This has led to a series of erroneous policies in this region that endanger their existence as peoples. Faced with this, the indigenous peoples continue to fight for the recognition of their municipal titles and the strengthening of their processes of autonomy, self-government and the construction of integral territories"; not only now to face the COVID-19 pandemic, but to ensure their political and economic continuity. Pope Francis also said: "The defense of the territory is fundamental in the face of external threats such as: mining activities, monocultures, megaprojects, climate change, etc. and territorial conflicts deriving from invasions, borders with settlers and between communities". The Synod on the Amazon and the Apostolic Exhortation Querida Amazonia offered a ray of hope in this difficult time. Dialogue, knowledge and learning from the experiences of these indigenous peoples, it is said, is fundamental, not only for these societies, but for the rest of the planet. (CE) (Agenzia Fides, 5/7/2021)

EUROPE/ITALY - A Scottish woman, missionary in Egypt and the Middle East, at the head of the Comboni Missionaries