ASIA/LEBANON - Father Rouphael Zgheib on the summit in the Vatican: Many ideas for a new beginning 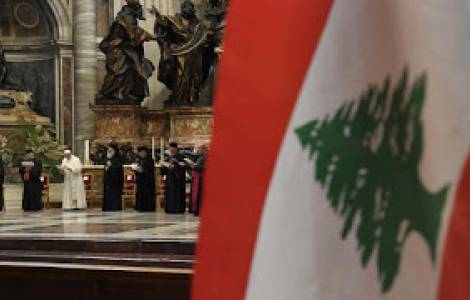 2021-08-30
"Every time a Lebanese emigrates, we lose our battle". Patriarch Rai raises the alarm about migratory "haemorrhage"

Jounieh (Agenzia Fides) - You neither want to remain in the role of victim nor entrench yourself in a self-centered manner. The day of prayer and reflection on Lebanon, on which Pope Francis brought together the representatives of the ecclesiastical communities present in Lebanon, should not be an excuse to reflect on one's own failure or to nourish feelings of insecurity. On the contrary, it seemed to be a day full of ideas that can help the Christians of Lebanon to make a new contribution and to find ways out of the crisis that is gripping the country. The aim is to recognize one's own mistakes, but also to emphasize the human and spiritual riches that are to be valued. The Maronite priest Rouphael Zgheib, National Director of the Pontifical Mission Societies of Lebanon, is convinced of this.
"First of all" - underlines Father Zgheib, who in conversation with Fides, commented on the day of prayer and reflection for Lebanon on Thursday, July 1st in the Vatican, "I was surprised that Pope Francis' speech at the end of the day did not begin with complaints and accusations directed at others, but with a plea for forgiveness for the lack of Christian witness on our part. The tendency to always blame others for the country's evils, starting with the politicians, can become an alibi for acquitting yourself and not questioning how we can testify to our faith under the given circumstances and conditions".
At the meeting in Rome, according to the Maronite priest, no one expected magical solutions or suspected that the serious crisis that the country was going through could be overcome immediately, possibly relying on external help or possible "protectors". "The passages in which the Pope invited us to take into account women, young people and the connections with the Lebanese in the diaspora, who are scattered all over the world, seemed important to me", Khalil Gibran, the poet quoted twice by Pope, was intimately linked to his Lebanese identity, despite having lived most of his life in the USA. As for women and young people, they are adequately taken seriously not only in political life, but also in ecclesial life. For many boys and girls from Christian families, the vital relationship with faith in Christ no longer appears to be taken for granted, despite many rhetorical speeches by those who keep repeating that young people are our future, without looking at the present".
The Lebanese institutional system with all its limitations continues to be mentioned when it comes to shaping the "coexistence of different people" that characterizes the Lebanese plurality. "In Pope Francis' speech", Father Rouphael underlines, "there are no direct references to institutional issues, also because opinions can differ even among the heads of the Christian churches when one enters the field of political decision-making. The Pope did not even address the question of numbers and the changing power relations between the various communities from a demographic point of view. What seems obvious to me is that the Pope has not made the defense of powers and political activities reserved for Christians a priority. The fate of the Lebanese Christian communities remains shared with our fellow Muslim, Shiite and Sunni citizens.
And the charitable and social institutions run by Christians must be preserved as a precious good, because they represent an important contribution by Christians to the entire Lebanese community, in the sense of the common good, to which the Pope also appealed several times in his speech". (GV) (Agenzia Fides, 2/7/2021)

EUROPE/HUNGARY - Russian Metropolitan Hilarion: Orthodox and Catholics share the same faith in the real presence of Christ in the Eucharist

VATICAN - Pope Francis to the Lebanese: "I greatly desire to visit you"