NEWS ANALYSIS - Among poverty and instability, the prophetic voice of the Church in Congo 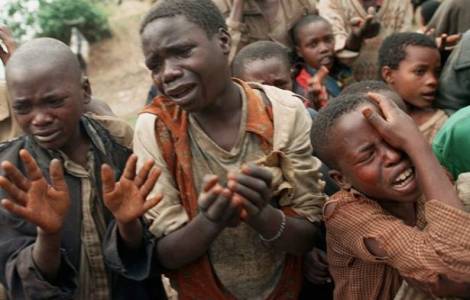 2021-08-17
"Why should criminals be rewarded": Nobel laureate criticizes the president's appointment of a former rebel leader

Uvira (Agenzia Fides) - "Whether it is foreign powers (France, Belgium, USA, or others), neighboring countries (Uganda, Rwanda, etc.) or some Congolese leaders, warlords, multinationals, NGOs, or even some members of the famous MONUSCO (the UN interposition force, ed), Congo, since its independence, has always been plundered for its numerous and rich natural resources, especially minerals, and then left in poverty and instability". As Mgr. Muyengo Mulombe, Bishop of Uvira in South Kivu, reports to Agenzia Fides, the Democratic Republic of Congo is in a serious humanitarian, social and political situation. The nation pays a high price for the simple reason of being rich, perhaps the most resource-blessed nation on earth. The eastern regions, in particular, caught between open conflict with more than 140 militias in action, mass exodus, chaos and environmental disasters, live in constant emergency.
Among the authoritative voices to stand up for the defense, Mgr. Muyengo comments: "The situation in the eastern regions continues to deteriorate. The last few years have also been marked by killings and massacres in Ituri. The war operations are carried out by the Ugandan ADF (Allied Democratic Forces, a terrorist group of Islamic origin) but we know that there are also Congolese political leaders involved in the affair.
Recently, President Tshisekedi declared a state of emergency in Ituri and North Kivu by appointing military officers to head these two provinces for a month in office. As for South Kivu, in the high and medium plateaus of the territories of Uvira, Fizi and Mwenga - all belonging to my diocese - the situation is dramatic: both national and foreign armed gangs (Burundian and Rwandan) raging throughout the area. Almost every day we see the infiltration of elements from Rwanda and Burundi, not to mention local militias, bandits, kidnappers, local criminals who are dedicated to the destruction of roads and infrastructures and other criminals. To give just one example: in early May, we witnessed seven murders in the city of Uvira alone and the ferocious response of the civilian population against some of the killers. Tension is high and people are wondering why the state of emergency concerns Ituri and North Kivu and not South or North Katanga where clashes are taking place". ( - continues) (Agenzia Fides, 26/6/2021)