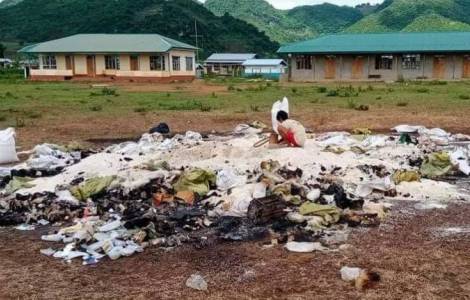 Pekhon (Agenzia Fides) - The Myanmar army (Tatmadaw) is destroying tons of sacks of rice that had been stored and preserved to feed the internally displaced people in the village of Loi Ying Taungche, near the city of Moebye, in the territory of the diocese Catholic Church of Pekhon. This was reported by a source of Fides in the local Church of Pekhon, in an area located in the Burmese state of Shan, in the south of the country. Suffragan of the archdiocese of Taunggyi, the diocese of Pekhon hosts about 55 thousand baptized out of 320 thousand inhabitants in its territory. In recent weeks, the Cathedral of the Sacred Heart of Jesus, in the diocese of Phekhon, which housed internally displaced people, has been hit by artillery from the Burmese army.
In this area, the popular defense forces have been fighting the Burmese military since May. As reported by the source of Fides, who asks for anonymity for security reasons, a strong food crisis is expected, purposely induced by the armed forces to stop any popular resistance. The violence against the civilian population who suffer even leads to the destruction of stocks of medicines and small health dispensaries organized by the people of the villages. The Burmese army, notes the source of Fides, uses the "policy of the four cuts": cutting off all access to food, communications, transport and finances, to reduce the population to its limit, in a work of indiscriminate violation of human rights and ferocity perpetrated on innocent people. Civilians are mistreated because they are accused of having links with the resistance forces. For this reason, when soldiers enter the villages, the inhabitants run to hide in the jungle or seek shelter in religious institutes and structures such as Catholic centers or Buddhist monasteries, hoping to be spared from violence. Given the situation, a food emergency is expected in various areas of the country. Increases in the prices of basic foodstuffs have particularly affected remote areas: in the state of Kachin, Kayah, Shan, the cost of rice has increased by 50% and rice itself is starting to run out. The cost of transporting products from farms to cities has also risen, given the soaring price of fuel, which rose 30% after the February 1st coup. The UN World Food Program estimates that 3.4 million people will suffer from hunger in Myanmar within the next six months and said it is ready to triple the work of food assistance in the emergency situation, if the conditions allow it. "The brutal and indiscriminate attacks by the army threaten the lives of many thousands of men, women and children in the state of Kayah", said Thomas Andrews, UN Special Rapporteur on Human Rights in Myanmar, noting that among the more than 100,000 refugees only in that state "people who are starving, diseases could occur in the absence of immediate action". (PA-JZ) (Agenzia Fides, 11/6/2021)

AMERICA/CHILE - Violence against migrants: "We cannot allow a new epidemic, this time of hatred, racism and xenophobia"

AMERICA/BRAZIL - Catholic Church Action Week: More than half of Brazilian families are affected by food insecurity