AMERICA/BRAZIL - Catholic Church Action Week: More than half of Brazilian families are affected by food insecurity 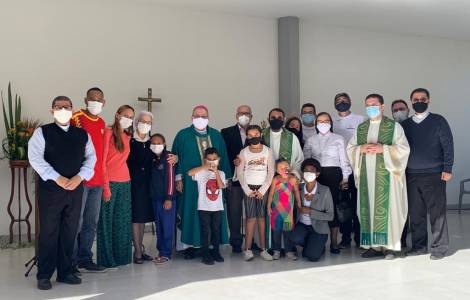 2021-09-22
Qualified missionary animators: course to deepen the history and objectives of the Mission Day, Missionary Month and the Missionary Campaign

2021-09-06
Independence Day "should make us recognize that we are all brothers, including those with whom we disagree"

2021-08-06
"Violence generates violence", the Catholic community calls for an end to clashes between police and Roma

Brasilia (Agenzia Fides) - With a Eucharistic celebration that took place yesterday, June 8, in the Casa Bom Samaritano in Brasilia, where Venezuelan migrants are welcomed, the week of action of the Catholic Church in Brazil began, as part of the second phase of the Action solidarity emergency "It is time to take care". The initiative takes place from June 8th to 12th with numerous solidarity actions of the dioceses, organizations and parishes of the Catholic Church in Brazil.
On Easter Sunday of last year, April 12, 2020, the Brazilian Bishops' Conference (CNBB) in cooperation with Caritas Brazil started the aid program with the collection of food, hygiene and cleaning products for the benefit of the Brazilian citizens
dramatically affected by the consequences of the pandemic, such as homeless, migrant, refugees, unemployed, etc…(see Fides, 11/4/2020; 16/4/2020).
In welcoming the participants, the director of the Institute for Migration and Human Rights, Sister Rosita Milesi, one of the coordinators of the refugee shelter "Bom Samaritano", emphasized the importance of carrying out such action weeks at a time when more than half of the Brazilian population is affected by food insecurity. In this context, the religious referred to data from the “Food for Justice” research group at the Free University of Berlin, which shows that more than half of the families in the country (59.4%) suffered from food insecurity between August and December 2020 and millions of Brazilians could not eat enough or lived in the uncertainty of access to food.
The Mass, presided over by the Auxiliary Bishop of Rio de Janeiro and Secretary General of the Bishops' Conference of Brazil (CNBB), Monsignor Joel Portella Amado, was attended by Venezuelan migrants who live in the Casa Bom Samaritano. Many representatives of the partner organizations involved in the implementation of the week of action were also present. The bishop emphasized that this second phase focuses on the fight against hunger in many communities across the country. The Secretary General of the CNBB also invited everyone to take part next Saturday, June 12, in the food collection that Catholic communities are using to try to cope with the aftermath of the pandemic.
According to Caritas Brazil, since the start of the second phase of the campaign on April 11, 2021, 1.5 tons of food, 117,000 personal care sets, 115,000 sets with materials for individual protection and 53,000 items of clothing and shoes have been collected. (SL) (Agenzia Fides, 9/6/2021)

AMERICA/PERU - The Church is always available to collaborate with the State in the social, educational and health sectors, for the common good