ASIA/CAMBODIA - Catholic Mission's aid to the population suffering from confinement 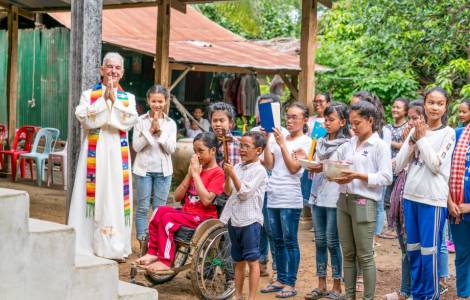 2022-07-15
Appointment of the Apostolic Prefect of Kompong-Cham

Phnom Penh (Agenzia Fides) – To give a prompt humanitarian response to the food crisis that involved the Cambodian population following the lockdown imposed at the end of April: with this spirit "Catholic Mission", the National Direction of the Pontifical Mission Societies in Australia, has activated extraordinary assistance to the suffering and destitute population. As we learn from a note sent to Agenzia Fides, the support operations were carried out within the "Catholic Alliance for Charity and Development" (CACD), a network of Catholic charitable associations operating in Cambodia, of which Catholic Mission is part. Forced isolation was made necessary following the recent surge in Covid-19 cases: despite being among the countries that until January 2021 had best contained the spread of the virus, in recent months Cambodia has seen a worrying increase in infections, registering over 18 thousand cases. "Following the announcement of the lockdown, real panic reactions with assaults on the markets were found in the capital Phnom Penh: this resulted in a serious shortage of food and supplies. To this emergency, Catholic Mission is responding with supplies of food and other basic necessities. Witness through charity is a central element of the mission, to bring the presence of Christ to a world that desires the fullness of life", reports the Director of Catholic Mission, Br. Brian Lucas. Among those who benefited from the aid, also the people involved in the two permanent projects of Catholic Mission in Cambodia, the "Phnom Voah" farm and "St. Francis Private Technical High School", located about 170 kilometers from the capital: "we sent an urgent delivery of 3,000 eggs, a thousand kilograms of rice, vegetables, sugar cane and meat to the two locations. In addition, the Catholic Mission's Regional Development Office has allocated additional funds for the purchase of food for 200 families for the two-week lockdown". Founded in Sydney in 1847, "Catholic Mission" contributes to the financing and support of projects and initiatives managed by the Churches in Africa, Asia, Oceania and South America in areas such as spiritual formation, pastoral care, education, health, sanitation and agricultural programs. (LF) (Agenzia Fides, 15/5/2021)