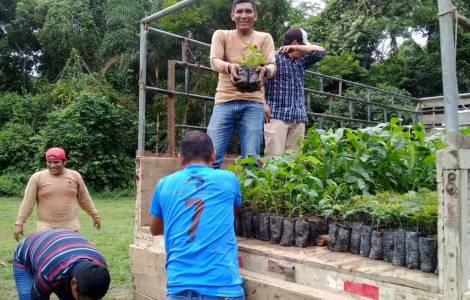 2022-04-29
The "Day of the Catechist": disciple-missionary called to live synodality

2022-04-22
The Bishops to the President and parliamentarians: "Assume your responsibility for which you were elected!"

2022-04-06
The Bishops: "crises cannot be resolved with the suspension of rights"

Yurimaguas (Agenzia Fides) - In order to contribute to sustainable development by adapting the most vulnerable families to climate change, Cáritas Peru together with Cáritas Yurimaguas, with the support of Cáritas Spain, created the project called "Territory management for disaster risk reduction and adaptation to climate change, to ensure food sovereignty in the lowland areas of the Peruvian Amazon", in the province of Upper Amazonas, Loreto, Peru. This project has managed to bring benefits to 1,116 families in 30 rural communities, or 5,580 vulnerable people in the river basins of the Huallaga River and the Paranapura River, in the district of Yurimaguas, province of Alto Amazonas, Loreto. "For three years (2017-2020), the project supported activities in agroforestry, risk management and adaptation to climate change, nutritional surveillance and food safety, in addition to the Legal Physical Hygiene of the municipal area, to support families in the formalization of their ownership and / or develop plans to buy the properties", explained Carla Linares Santoyo, general secretary of Cáritas Yurimaguas. One of the strengths of the project was Agroforestry, managing to cultivate 410 hectares with forest, agricultural, fruit and citrus species, of which 254 hectares of monoculture were recovered, which were integrated with agroforestry systems (SAF), and 156 hectares of abandoned farms using the SAF model. "The production of forest plants, fruit and citrus plants was carried out at the San Ramón de Yurimaguas experimental station, which belongs to the National Institute for Agricultural Innovation (INIA) and in the final phase at the Apangurayacu village production center, as well as in 21 municipal nurseries, in order to replicate the experiences and strengthen the knowledge of the beneficiary families, so that they can extend the initiative in later years", a task that they carry out accompanied by environmental promoters, trained in each community, as indicated by the Secretary General by Cáritas Yurimaguas. One of the most relevant aspects of the project were preventive actions on health and nutritional surveillance in order to reduce chronic malnutrition and anemia in children, pregnant women, infants and children under 5 years of age. In 2017 (beginning of the project) a prevalence of 20.27% of chronic malnutrition (90 children) was found in 436 children from 28 communities. At the end of 2018, only 7.88% (29 children) were found. The results indicate a 12% decrease in chronic child malnutrition, representing 61 recovered children. In addition, training workshops were created for community health workers and health personnel; demonstration sessions with local foods for mothers of children under 5; nutritional counseling; supply of pesticides with the support of health personnel and improvement of food safety, through the delivery of chickens, guinea pigs and the installation of 237 organic gardens with local species. (CE) (Agenzia Fides, 14/5/2021)

ASIA/INDIA - The Cathedral of Calcutta launches "food for all" initiative

AFRICA/DR CONGO - The Bishops: 770,000 children under 5 years of age risk hunger in Kasai