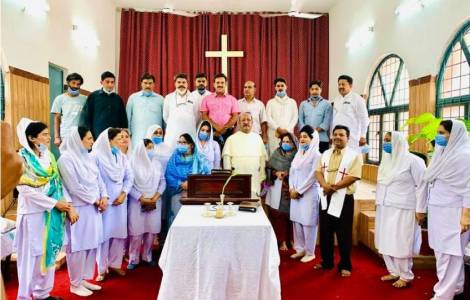 Lahore (Agenzia Fides) - "Peace and reconciliation are always possible. Blessed are the peacemakers. We thank God that the tensions between the Christian and Muslim staff of the Punjab Mental Health Institute have become less frequent and peace, harmony and mutual respect have returned. Muslim and Christian nurses, doctors, along with paramedical staff, offered the common prayer of thanksgiving to end the week-long tensions among the hospital staff". This is what Fr. James Channan OP, Director of the "Peace Center" in Lahore, told Fides in the aftermath of the interreligious tensions and violence that affected the Lahore hospital.
Dominican Fr. James Channan, a priest well known in Pakistan for his efforts to build peace and harmony, also said: "For the interreligious prayer meeting the hospital staff gathered on May 7 at the auditorium of the hospital. I explained the message of the Beatitudes of the Gospel according to Matthew, encouraging everyone to understand the importance of peace and harmony. At the end of the prayer meeting, the Muslim and Christian staff embraced each other and decided to reestablish reconciliation and work together in peace and unity as before". A bitter confrontation between Christian and Muslim nurses reached its climax when three Christian hospital nurses were accused of insulting Islam on April 29. One of the Christian nurses posted a video in the hospital nursing staff's "WhatsApp" group, a video in which an unidentified man talks about Tehreek-e-Labbaik Pakistan (TLP), a banned political-religious organization in Pakistan, and also inveighs against the Prime Minister and the armed forces of Pakistan. Muslim nurses interpreted this as an insult to their religion. Muslim staff gathered in the hospital threatening Christian nurses, entering the auditorium and occupied the part that is used weekly as a Christian Chapel, chanting Islamic slogans, reciting Islamic prayers and even calling Christian staff to convert to Islam. Fr. James Channan reports to Fides: "When I learned of the incident, I immediately contacted my Muslim friends from the Commission for Interreligious Harmony and with them I went to meet with the hospital administration to resolve the matter. We listened to the concerns of Muslim and Christian nurses and did our best to alleviate the existing tension". Fr. Channan adds: "I am grateful to my Muslim friends, especially Allama Muhammad Zubair Abid, Vice President of the Pakistan Ulema Board, members of the National Assembly of the Government of Pakistan, Shunila Ruth, Parliamentary Secretary for Interreligious Harmony, Dr. Nausheen Hamid, Parliamentary Secretary for the Ministry of Health, Ijaz Augustine, and the Hospital administration for facilitating this reconciliation process for the good of the staff and the hospital, and for peace and harmony in the country".
This is the third incident in which Christian nurses have been accused of blasphemy in 2021: the first incident occurred in a hospital in Karachi (see Fides, 29/1/2021); the second accident occurred in a hospital in Faisalabad (see Fides, 10/4/2021) and this is the third incident, which happened in the largest mental health hospital in the Lahore city area. (AG-PA) (Agenzia Fides, 10/5/2021)