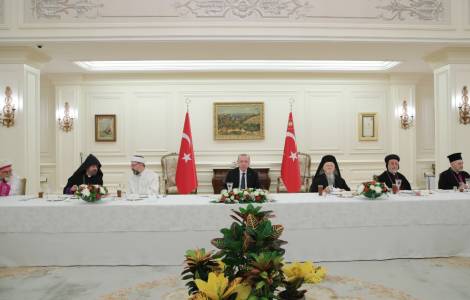 2022-03-01
Bishop Bizzeti: the Turkish government's "courageous" choice to close access to the Black Sea to warships

2022-02-28
Ukrainian President Zelensky telephones Patriarch Bartholomew: "We feel the support of your prayers"

2022-02-10
The ancient Monastery of Sumela used as a disco for an electronic music video. The government opens an investigation

2022-01-27
Erdogan confirms: new regulations and new elections for the Foundations of non-Muslim communities

Ankara (Agenzia Fides) – On Wednesday, 5 May, Turkish President, Recep Tayyip Erdogan hosted and offered an official Iftar dinner (fast-breaking) during the month of Ramadan, in the mega presidential palace in Ankara to all the leaders of the Christian communities present in Turkey, together with other representatives of the national minority religious communities, with the intention of publicly witnessing the good relations between the Turkish leaders and the non-Muslim faith communities present in Turkey. The event was strongly supported by Erdogan, also for its symbolic impact. The importance attributed by the Turkish President to the dinner with the leaders of non-Islamic faith communities stands out even more if one takes into account the general situation in which the country finds itself, where due to the COVID-19 pandemic, the entire population has been prohibited from communally consuming Sahur and Iftar, the meals before and after the fast (which during the holy month of Ramadan lasts from dawn to sunset for all observant Muslims). The Iftar offered in Ankara by President Erdovan was attended, among others, by the Ecumenical Patriarch of Constantinople Bartholomew I, the Armenian Patriarch of Constantinople Sahak Maşalyan, the Syrian Orthodox Metropolitan Yusuf Çetin and the Syrian Catholic Patriarchal Vicar Orhan Abdulahad Çanlı, together with those responsible of some foundations and institutions linked to Christian communities. Representatives of non-Christian faith communities also included Chief Rabbi Isak Haleva and President of the Turkish Jewish Community Ishak Ibrahimzadeh. Institutional sources have not provided details of the conversations that took place during the Iftar, but in recent days rumors have leaked in the Turkish media according to which the topics that were put on the table during the dinner included the question of the properties to be returned to the foundations of minority communities, possible requests from religious communities in relation to the draft new Constitution and the evaluation of the recent statement by US President Joe Biden, who defined the massacres of Armenians as "genocide" perpetrated on the Anatolian peninsula between 1915 and 1916. Recently, as reported by Agenzia Fides (see Fides, 27/4/2021), President Erdogan had sent a message to the Armenian Patriarch Sahak II on the occasion of April 24, the date on which the Armenian communities scattered around the world commemorate the "Great Evil" (expression used to indicate the massacres of Armenians that took place in Anatolia in the early years of the First World War). In his message, the Turkish President had emphasized the secular coexistence between Turks and Armenians in Anatolia, underlining that they all belonged "to the same human family, regardless of ethnicity, religion, language or color". In those days, the Armenian Patriarch Sahak II, in some statements reported by the Turkish media, had expressed his regret "to see that the sufferings of our people and the sacred memories of our ancestors are used as a tool to achieve contingent political objectives", adding that Erdogan himself "was the only statesman in the history of the Republic of Turkey who published messages on this subject, as Prime Minister and President of the Republic", showing that he shares "our pain and respect for the memory of our children who lost their lives in exile". Ankara does not recognize the massacres of the Armenians in Anatolia between 1915 and 1916 as a planned extermination on an ethnic basis, considering these events as a tragic consequence of the state of chaos linked to the war conflict that would lead to the dissolution of the Ottoman Empire. (GV) (Agenzia Fides, 6/5/2021)

ASIA/PAKISTAN - Civil society to government: it is necessary to protect religious minorities

ASIA/TURKEY - In the United Kingdom and Israel, new legislative proposals to sanction the recognition of the Armenian Genocide