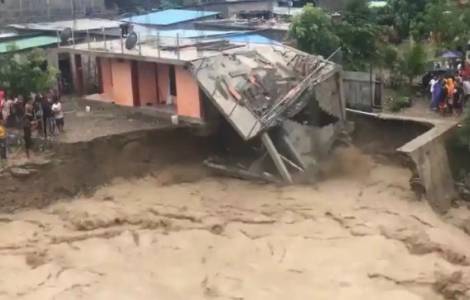 2022-04-22
The Archbishop of Dili to the president: the Constitution must be respected, for a prosperous and peaceful nation

Dili (Agenzia Fides) - The Catholic Church of East Timor is collaborating with the government to repair and rebuild the houses damaged by the floods last month, caused by cyclone Seroja, which caused the death of at least 41 people and thousands of internally displaced persons. "We have taken a joint initiative, undertaken by the Catholic Bishops Conference of Timor (CET) and by other ecclesial institutions to come to the aid of those affected", explains to Fides Fr. Leandro Maria Alves, Executive Secretary of the CET. "The network of Catholic organizations and bodies contributed to the purchase of building materials for 15 houses, and another part of the construction is carried out by government authorities", says Fr. Alves. In addition, Caritas East Timor is planning to rebuild 58 houses. "These efforts to help people after natural disasters are part of the Church's social commitment to help people in need, both in the short and long term", says Fr. Alves. Immediately after the flood, Msgr. Virgilio Do Carmo Da Silva, Archbishop of Dili, visited the people affected by the flood and immediately distributed first aid. At that juncture, the CET reached 15,000 people and provided food aid, clothing and other necessary supplies for a value of 50,000 US dollars, funds raised with the help of the local population and thanks to foreign donors. According to Fr. Angelo Salshina, Director of the Commission for social services of the Archdiocese of Dili, "the Catholic community did not spare itself and many faithful have contributed, in a spirit of communion and solidarity, to help the families severely affected by the floods". As part of this commitment, five children have been welcomed and cared for in a Church-run orphanage as their parents died in the disaster. "We try to help the affected families to recover and support themselves autonomously to start their lives again", explains Father Salshina. The government faces a huge challenge to repair and rebuild infrastructure such as roads and media and other public buildings. In addition, more than 25,000 homes of private citizens are in need of repair. The government has allocated a budget of $ 55 million for reconstruction. On Easter Sunday, April 4, tropical cyclone Seroja struck East Timor and East Nusa Tenggara Province in Indonesia, causing floods and landslides. In Indonesia, 181 people died. According to a recent UN report, 3,925 people, displaced by the floods, are expected to return home in the coming weeks in East Timor. The displaced are currently camped in 25 evacuation centers in Deli, the capital of East Timor. The floods have damaged 2,163 hectares of farmland, which could negatively affect the food security of the already poor population. (SD-PA) (Agenzia Fides, 6/5/2021)

AFRICA/ETHIOPIA - Tigray: the worst offensive in recent times, an emergency for hundreds of thousands of displaced civilians

EUROPE/UKRAINE - Orionines: "no one can deny us the right to build where others destroy"