ASIA/SOUTH KOREA - The Korean Church's farewell to Cardinal Cheong, Pastor "as caring as a mother" 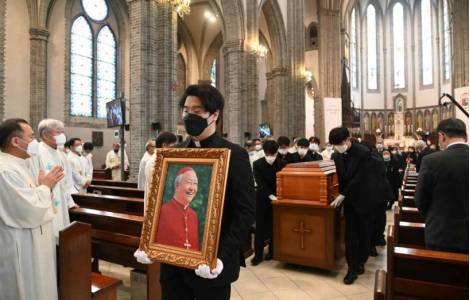 2022-03-21
Resignation of the Bishop of Cheongju and appointment

2022-01-26
The Archbishop and Minister: working together for reconciliation and reunification of the Koreas

Seoul (Agenzia Fides) - "We live happily in His will for our life. We live happily by helping others to live a happy life": these are the last words of Cardinal Nicholas Cheong Jin-suk, who died on April 27 in Seoul, remembered during the funeral Mass by the Archbishop of Seoul, Cardinal Andrew Yeom.
The Cardinal's solemn funeral was held in Myeongdong Cathedral in Seoul on May 1, with the participation of the Korean Bishops and, in strict compliance with anti-Covid rules, with an assembly of 250 people including clergy, religious and faithful.
In his homily, Cardinal Yeom thanked God for Cardinal Cheong's long life of service. He recalled the late Cardinal as a mother, "who is warm-hearted, considerate and caring, while the late Cardinal Stephen Kim Sou-hwan was like a father". "Cardinal Cheong Jin-suk, was a tender and kind person with an open mind and full of love. Under his motto, 'Omnibus Omnia', he gave out everything that he had to churches and the poor. He donated his organs to devote himself to helping the weak", he said.
As communicated to Agenzia Fides by the Communications Office of the Archdiocese of Seoul, Cardinal Nicholas Cheong promised to donate his organs and corneas and signed a document on Sept. 27, 2018, which pledges to reject life-sustaining treatment as part of preparing for the end of his life. "Cardinal Cheong - the Archbishop of Seoul recalled - dedicated his life to the study of canon law and catechism. He authored and translated 65 books including Your Glory which was published last year based on the letters of Fr Andrew Kim Tae-gon, Korea's most popular martyred saint, to mark his 200th birth anniversary. And the Cardinal emphasized the value of faith of the martyrs and the importance of living out their faith while following their example of courage".
"In his pastoral ministry - he continued - he emphasised the values of life and the family. During his time as Archbishop in Seoul, he founded the 'Committee for Life' in October 2005 and dedicated Mass for Life in December that year which sought to spread the culture of respect for life, urging human beings that they should not mistake themselves for owners of the world".
One of the aspects that characterized his apostolic ministry, concluded Cardinal Yeom, was the material and spiritual commitment for unity, reconciliation and peace on the Korean peninsula and freedom of religion to be truly restored in North Korea. From 1998 to 2004, Cardinal Cheong was the head of the Korean Bishops' Commission for the Reconciliation of Korean People. He founded the Peace & Unity Centre in Paju, near the border with North Korea. The Center is a sacred shrine to wish and pray for national reconciliation and unity of South Korea and North Korea, and also to prepare and find a way to reach reunification eventually.
At the end of Mass, Archbishop Alfred Xuereb, Apostolic Nuncio to South Korea, read the condolence messages from Pope Francis, Cardinal Secretary of State Pietro Parolin, and Cardinal Luis Antonio Tagle, Prefect of the Congregation for Evangelization of Peoples.
Pope Francis expressed his condolences at the death of Cardinal Cheong, "United with you in thanksgiving for Cardinal Jinsuk's many years of service to the Church in Korea and to the Holy See", "I join all assembled for the solemn funeral Mass in commending his noble soul to the compassionate love of Christ the Good Shepherd". Cardinal Pietro Parolin, Vatican Secretary of State, expressed the hope that "merciful Lord will grant him the reward of his faith and his tireless labours for the Church", while Cardinal Luis Antonio Tagle assured "the closeness of this missionary dicastery, commending the soul of Cardinal Cheong to the infinite mercy of almighty god".
Mgr. Matthias Ri Iong-hoon, Bishop of Suwon and President of the Bishops' Conference of Korea, addressed a farewell message that reads: "Even in these difficult times caused by the COVID-19 pandemic, let us try to practice Cardinal Cheong's spirit of love for the Lord and our neighbours".
More than 50,000 people, regardless of their religions, visited the Cathedral during the mourning period to pay their last respects to Cardinal Cheong while strictly following the guidelines of the infection prevention and control policy. The late Cardinal was buried in a Catholic cemetery in Yongin, on the southern outskirts of Seoul, where many celebrated priests, including Cardinal Stephen Kim Sou-hwan, are entombed. Cardinal Cheong was born in Seoul in 1931. He was ordained a priest on March 18, 1961. This year marked the 60th anniversary of his priestly ordination. (PA) (Agenzia Fides, 3/5/2021) 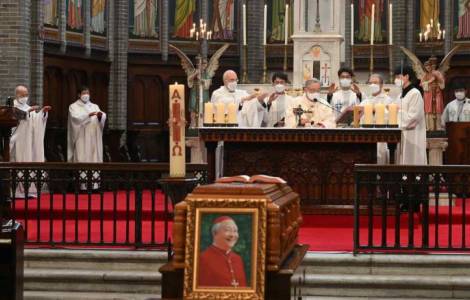 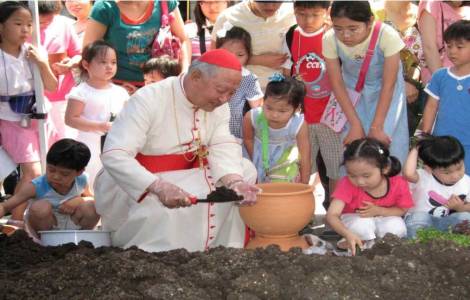 ASIA/MALAYSIA - In a book, the spirituality and missionary legacy of the first Malaysian Cardinal