EUROPE/SPAIN - Day for Native Vocations: the Gospel brought by the missionaries has taken root and is bearing fruit 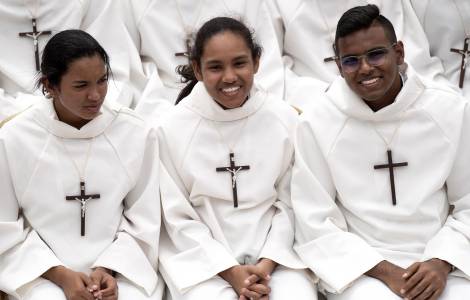 2021-07-13
New board of directors for the NGO Misión América: aid for the integral development of people

2021-06-23
The generosity of the Spanish for the missions, in a year marked by the difficulties of the pandemic

2021-05-26
Caritas Spain: despite alarmism, Europe appears to be compromised in a limited way in African emigration

2021-05-19
The Bishops: Thousands of migrants are in Ceuta: "do not exploit their legitimate aspirations for political purposes"

2021-04-24
Day for Native Vocations: the Gospel brought by the missionaries has taken root and is bearing fruit

Madrid (Agenzia Fides) - Pope Francis' suggestion to young people to ask themselves "For who am I?" (cf. Christus vivit) is the motto of the World Day of Prayer for Vocations and the Day of Native Vocations that the Church of Spain celebrates on April 25, the fourth Sunday of Easter. Organized by the Spanish Episcopal Conference (EEC), the Confederation of Religious (CONFER), the Conference of Secular Institutes (CEDIS) and the Pontifical Mission Societies (OMP), the Day is an opportunity for reflection, prayer and support for vocations, especially in mission territories.
As the booklets for the preparation and animation of the Day underline, "Native vocations are those that arise in mission territories and which often have serious material difficulties in developing. These vocations have received the Gospel from the missionaries, they are the sign that this has taken root in their cultures and become the fundamental stone for the future of their local Churches. In the last thirty years these vocations have doubled. This Day invites us to collaborate economically for their formation". For this purpose, a site has been created with the testimonies of those who have answered the Pope's existential question, which is the question that every follower of Christ should ask himself (http://paraquiensoy.com). In addition to the video testimonies of women and men who have responded with their lives, the Pope's message for this day, the manifesto, ideas for a week of prayer for catechesis for the various age groups, suggestions for a prayer vigil for young people and adults, a liturgical booklet for the fourth Sunday of Easter are all available. It also indicates how one can collaborate with the vocations of missionary countries through the Pontifical Society of St. Peter the Apostle, one of the four Pontifical Mission Societies, which focuses on indigenous vocations, to support many young people who need material resources to respond yes to their answer. The hymn of this day, by the Hakuna group, was presented on the Youtube channel of the day. On the eve of the Day, Saturday April 24, there will be a Prayer Vigil for Vocations. On April 25, the broadcasting of the Holy Mass from 2 TVE at 10:30 will allow all the faithful, who cannot participate in the Eucharist in person on Sunday, to join the common prayer of the Church for vocations. Currently, according to data from the Episcopal Commission of the Clergy and Seminaries of the Spanish Episcopal Conference, there are 1,066 major seminarians in all Spanish dioceses (62 fewer than the previous year) and 126 priests (2 more) have been ordained.
In the Spanish minor seminaries there are 827 seminarians (last year there were 890), of whom 25 went to the major seminary (3 more than the previous year).
As for religious institutes and societies of apostolic life, according to the statistics of CONFER of October 2020, their members are 37,286: of these 28,323 religious (counting 659 junior women), from 302 congregations; and 8,963 religious (with 260 juniores), from 109 institutes. This represents a decrease of 1,402 units compared to 2019. In January 2021, the data of CEDIS, the Spanish Conference of Secular Institutes, speak of 2,354 members (36 fewer than the beginning of 2020). Of these institutes, 26 are of Spanish foundation, while another 14, founded outside the national borders, have members in Spain. In all cases, their charism is to follow Christ and live their apostolic commitment integrated into the world. (SL) (Agenzia Fides, 24/4/2021)