AMERICA/ECUADOR - Bishops appeal after the second round of presidential elections 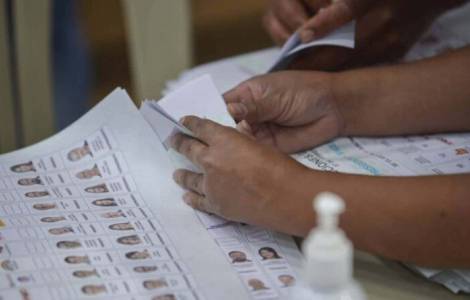 2021-07-08
Day of Native Vocations: "May no vocation be lost due to lack of economic resources"

2021-07-06
Resignation and appointment of vicar apostolic of Esmeraldas

2021-06-18
Day of the Missionary Ad gentes: "the light of the Gospel that we bring will be able to illuminate the dark night of the peoples"

2021-02-20
Bishops to the authorities: the most vulnerable people must receive the vaccine first

Quito (Agenzia Fides) - The Electoral Council in Ecuador had not declared an official winner in the contest to replace President Lenin Moreno next month, but results released by the agency showed former banker Mr Lasso with about 53% of votes and leftist Andres Arauz at 47.52% with just over 90% of votes counted.
In a statement published on 11 April, sent to Fides, the Bishops of the Catholic Church, "as brothers and servants of all", invite "the electoral authorities to guarantee the transparency and truthfulness of the results, candidates and the citizens all to wait and accept the results with dignity and patriotism", as "the campaign is now over".
The Bishops turn to those who have been elected to remind them of their commitment to "give the best of themselves, so that the aspirations of our people are met, as was promised during the election campaign". They also ask for "the overcoming of ideological fanaticism and extremist positions", and to "govern wisely, legislate fairly and control with transparency". Furthermore, it is necessary to respect those who think differently and reaffirm that dialogue, in a democratic system, "is essential" to guarantee the credibility of the authorities and the trust of citizens.
"Our appeal is to always be close to the population, sharing and listening to their needs, especially of the most vulnerable people, to find together the best solutions" ask the Bishops, reiterating the need for "a culture of listening", in a way that no one gives himself the right to think and decide for others.
In their appeal they ask those who are elected to "assume power as a service to the community" and "not as an instrument of domination, social prestige or personal, family and partisan privileges. The poor are not an object or means to conquer power and perpetuate it". Finally, they reiterate the call for respect for fundamental human rights, starting with life in all its expressions, individual, social, political and religious freedom, the right to a complete education, to decent and adequate work, the right to health, finally, to ensure the rights of women and the rights of nature, the Bishops write, "we claim our right to raise our prophetic voice to denounce the oblivion of the weak". (SL) (Agenzia Fides, 12/4/2021)