AMERICA/BOLIVIA - The Archbishop of Sucre: "We will have very difficult moments but we must move forward because we do not live to die, but to live" 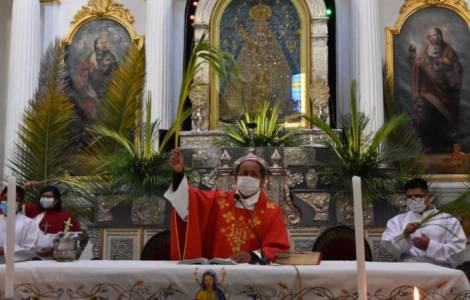 2021-03-31
The Archbishop of Sucre: "We will have very difficult moments but we must move forward because we do not live to die, but to live"

2021-03-04
Bishops on the upcoming elections: "For a democratic and just Bolivia"

2021-02-13
One year after "Querida Amazonia", the appeal to dream of an Amazon where the rights of the poorest are still valid

Sucre (Agenzia Fides) - "As at every beginning of Holy Week, the celebration of Palm Sunday invites us to experience the 'Major Week' as it is traditionally called by Christians. Thus, the story of the Lord's Passion reminds us that people wanted Jesus to free them from the Roman Empire, but Jesus communicates another type of liberation, he wants to free us from sin, from selfishness, from division, from pride, from these anti-values that do not allow us to live in fraternity, respecing the dignity of each person". These were the words of Archbishop Ricardo Centellas of Sucre, in his homily on Sunday, March 28, Palm Sunday.
"The interesting thing about the Passion of Jesus is that his mission does not end with death, it does not end in failure, but it is a step towards a new life. Jesus rises, so that his story, his mission continue and be amongst us, to celebrate it in the Eucharist and in many testimonies of faith", continued the Archbishop, who then proposed a comparison with the reality of the country. "This message is an invitation. We will have very difficult moments in personal, social and family life that mark the human limit, but we must forward because death is not the end of life, we do not live to die, but to live".
Bolivia continues to experience considerable political tension following the government measures against the alleged protagonists of the so-called "coup d'etat" which led to the imprisonment of interim President Jeanine Áñez (see Fides, 16/3/2021). Yesterday the leader of the Comunidad Ciudadana (CC), Carlos Mesa, proposed six measures for the reconciliation and pacification of the country, which were immediately rejected by the President of Deputies, Freddy Mamani (of the MAS party), who also defined the proposal "demagogic".
The opposition politician stated that it is essential that "we are willing to overcome the confrontation and project with genuine will the decision to seek peace and build a better future for Bolivia, as a condition for solving our great problems of employment, economy, health, education and the environment".
The Bolivian Episcopal Conference (CEB) urged the government to desist from "total control of power, revenge and persecution", in reference to the arrests carried out in the context of investigations for the acts of violence that led to the resignation of the former President Evo Morales, in 2019. Msgr. Centellas, President of the CEB, asked for the immediate release of prisoners, respecting the due process, which is part of the fundamental rights, recognized internationally. "We cannot remain silent in the face of increasing political persecution, a reminder of sad moments in history, which does not generate trust, peace and reconciliation among all Bolivians", he said. (CE) (Agenzia Fides, 31/3/2021)

AMERICA - Jesuit Refugee Service: Latin America and the Caribbean the areas most affected by the pandemic in the world

AMERICA/PARAGUAY - Proposal for dialogue on the part of the Bishops to the Head of State in the face of the worsening health, economic and social situation

AMERICA/GUATEMALA - Centenary of the Archdiocese of Los Altos: "Evangelizing, forming disciples, bearing witness has been, is and will be our commitment"

AFRICA/GUINEA BISSAU - The Bishop of Bafatà died of Covid: the first Brazilian missionary Bishop of a mission territory outside Brazil