VATICAN - Cardinal Tagle: "The pandemic has exacerbated the inequalities and wounds of the world" 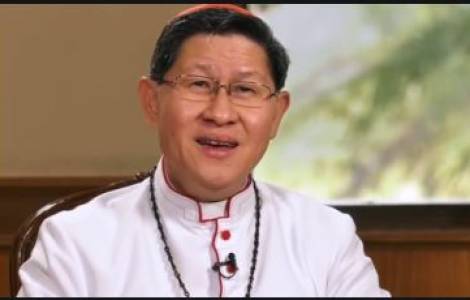 2022-01-22
Pope Francis will confer the ministries of catechist, lector upon lay men and women from different continents

Vatican City (Agenzia Fides) - "The pandemic has highlighted other types of diseases that already existed before: the lack of brotherhood and the barriers that separate the rich and the poor. There are those who can access the highest levels of studies and education while others who do not even have the opportunity to open a book; there are those who can go to the best hospitals and those who do not even have paracetamol available. Certainly the Covid-19 has exacerbated all this: let's think about the simplest sanitary provisions, such as washing hands or living apart. In many parts of the world there is no water and there are families of 6-7 people living in crowded conditions. Furthermore, the pandemic has put before the eyes of all the wrong priorities of our world: there are no masks, but there is money for weapons and other instruments of war". This was expressed by Cardinal Luis Antonio Tagle, Prefect of the Congregation for the Evangelization of Peoples, during the webinar “Touching the wounds of the world. Believing in times of Pandemic”, organized by the Franciscan Festival, by Editorial Misionera Italiana and by Antoniano de Bologna.
Cardinal Tagle spoke of the wounds of this time, looking at them from a hopeful perspective: "There are many kind of wounds caused by our wrong decisions, self-inflicted wounds. Then there are wounds caused by the outside, by other people, by systems and structures of indifference and inequality. I would like to return to March 27 of last year, in that empty St. Peter's Square: during that beautiful prayer, the Holy Father offered us a great gift of faith, reminding us that the Incarnation of Jesus Christ is the closeness of God to all who suffer. No one walks alone, no one suffers alone, no one dies alone: this is the medicine, Christ Jesus. Hence the wounds of love are born: the volunteers, the nurses, the nuns, the bishops, the laity who were and are willing to be infected by entering dangerous places, showing that they are willing to be hurt by love, by solidarity. When a person loves, he is willing to be hurt".
As recalled by Card. Tagle, right after the prayer of March 27, 2020, Pope Francis convened a task force to respond to the needs of the poorest countries and to plan a future of closeness after Covid: "The Congregation for Evangelization of Peoples, Caritas, the Dicastery for Integral Human Development and other realities of the Church were called to each give their own contribution. Our Dicastery of Propaganda Fide, for example, has assisted local Churches, especially in so-called institutional needs, for example to provide food and health and basic necessities in mission lands. Caritas, on the other hand, has been entrusted with the mission of education and training of local communities, to be prepared to face the pandemic, to help communities not to depend totally on their governments".
In the mission of the Church, beyond the pandemic emergency, Cardinal Tagle said, there is also the need to respond in a credible way to a growing secularization, linked to a globalization "which is not only an economic fact, but also a cultural fact", says the Cardinal. "It is not possible to put up shields or barriers to protect people from the circulation of these ideas, but this is not a problem, but a challenge that leads us to value our faith".
Finally, responding to a question about the agreement between the Holy See and China, Cardinal Tagle said: "I am optimistic about China. I know that our Pope Saint John Paul II had the dream of going there, and I am sure it is also the dream of Pope Francis. We hope that the agreement between China and the Holy See, although limited and not perfect, will open the doors to this possibility. Diplomacy with Asians is often surprising: when an open door is not expected, the windows are opened". (LF-PA) (Agenzia Fides, 25/3/2021)

VATICAN - On January 6, 1622, Pope Gregory XV founded the Congregation “de Propaganda Fide” for the reunification of Christians and the spread of the faith

VATICAN - Multiculturality and formation: the International Congress of Urbaniana University

AFRICA/EGYPT - Coptic Patriarch Tawadros: anti-Covid vaccines developed by scientists are a "blessing" from God for the entire human family

VATICAN - Pope Francis to Filipino migrants in Rome: you are "smugglers of faith"

AMERICA/SAN SALVADOR - Beatification of the four martyrs, the diocesan Postulator: "Our vocation is to follow the Lord"

VATICAN - Pope Francis: the proclamation of the Gospel is not a "cultural model" to be imposed on others

ASIA/CHINA - Christmas celebrated in the nation respecting health measures; in Mongolia the authorities grant Catholics the extraordinary opening of the church

ASIA/PAKISTAN - The Apostolic Nuncio to young people: education is crucial for your future