ASIA/HOLY LAND - Patriarch Theophilos III to the Primates of the Orthodox Churches: "the unity of Orthodoxy is our daily prayer" 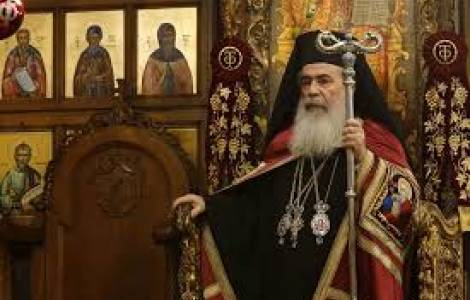 2022-05-04
Haifa, a praying multitude of thousands of people participate in the procession in honor of Our Lady of Mount Carmel

2022-04-12
Father Romanelli: 722 permits for Christians in Gaza to celebrate Easter in Jerusalem

2022-03-29
Alarm from the Latin Patriarchate: fake messages sent in the name of the Patriarch

Jerusalem (Agenzia Fides) - "I pray daily remembering each of you, offering praise, thanksgiving and intercessions, and knowing that 'his grace is sufficient for us, whose power is made perfect in our weakness' ". Thus Theophilos III, Greek Orthodox Patriarch of Jerusalem, confides in an open letter addressed to all the Patriarchs and Primates of the Orthodox Churches. The message, released at the beginning of the Orthodox Lent, represents a vibrant appeal to heal the wounds that have torn the communion of the Orthodox Churches in recent years. Misunderstandings and conflicts began with the non-participation of some Orthodox Churches in the Pan-Orthodox Council of Crete (2016) and then exploded with the conflict between the Moscow Patriarchate and the Ecumenical Patriarchate of Constantinople regarding the canonical status of the Orthodox communities in Ukraine.
In his appeal, full of quotations taken from the letters of St. Paul, Patriarch Theophilos indicates the prayer of reciprocal intercession and penance as the only useful remedies to heal wounds and rediscover harmony among brothers. "Let us continue to uphold one another in prayer", writes Theophilos, "and seek ways in which our local Orthodox Churches might bring hope, blessing and joy to one another. As Saint Paul says, 'Bear one another's burdens and thus you will fulfill the law of Christ'. We also join together in prayer for our brother, His All-Holiness Patriarch Bartholomew, and our fellow Orthodox Primates, and we look forward to serving together to further the unity of our communion".
In the patriarchal letter, the plea for the unity of the Orthodox Churches is intertwined with the reflections on the current historical situation, so severely marked by the pandemic. A condition that makes it even more urgent for all Christians to put aside divisions and confess together faith, hope and charity for the good of the suffering humanity.
Theophilos recalls that last year some Primates of the Orthodox Churches - including the Patriarch of Moscow Kirill - met in Amman to discuss the recent lacerations of Orthodoxy. "None of us", the Orthodox Patriarch of Jerusalem now notes, "imagined that we were meeting on the cusp of a global health catastrophe the scale of which has not been seen in our lifetimes". The pandemic - adds Theophilos "has required us to look to our own communities, those whom God has called us to serve, to lift up their hearts from despair and turn to the Lord who gives us hope. For we know 'while we were yet sinners, Christ died for us. Much more surely then, now that we have been justified by his blood, we will be saved through him from the wrath of God'".
Patriarch Theophilos offers to the reflection of the Orthodox Primates the passage of a hymn taken from the Triodion, the Lenten book of the Byzantine liturgy: "Brethren, let us not pray as the Pharisee: for he who exalts himself shall be humbled. Let us humble ourselves before God, and with fasting cry aloud as the Publican: God, be merciful to us sinners". (GV) (Agenzia Fides, 27/2/2021)

AMERICA - "Missionary conversion" at the center of the online Lenten retreat, promoted by the Pontifical Mission Societies