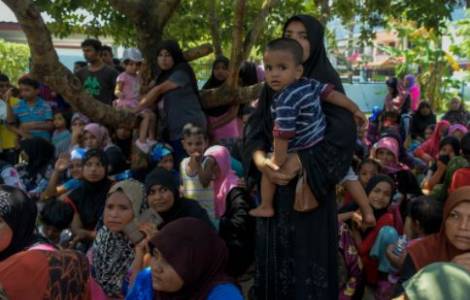 2021-03-12
Judicial decision on the use of the name of Allah in Christian publications, "a victory of common sense"

Kuala Lumpur (Agenzia Fides) - We must not participate in the "refoulement of refugees", by repatriating Myanmar nationals who have taken refuge in Malaysia in a coordinated manner with the armed forces of Myanmar. This is what the Council of Christian Churches of Malaysia (which brings together communities of different faiths) is asking the Malaysian government authorities, urging them to take care of people who have fled from a situation of violence and instability, without being complicit in serious violations of dignity and human rights. The exhortation comes after the Malaysian government repatriated 1,086 refugees to Myanmar, despite a suspensive order from a court. Numerous associations and NGOs for the protection of fundamental rights had warned the government, noting that among the people in question there were members of ethnic minorities fighting against the Burmese army and therefore destined to suffer persecution on their return to Myanmar.
In expressing their disagreement with the repatriation, the note sent to Agenzia Fides from Christian churches in Malaysia indicates: "In this period of political insecurity in Myanmar, repatriating these Burmese nationals means sending them back to an uncertain fate" while in the country, after the coup of February 1, the wave of peaceful popular demonstrations continues. The Secretary General of the Council of Christian Churches of Malaysia, rev. Dr. Hermen Shastri says: "The system of checks and balances, transparency and accountability, have almost disappeared and the fate of these people, if they are repatriated, is to condemn them to a hostile and very dangerous situation".
Shastri notes that the repatriation, in Myanmar's current conditions, "is contrary to international law and norms" urging the government to allow the UN High Commissioner for Refugees full access to detention centers to identify refugees and asylum seekers and to ensure their protection and safety".
Until law and order are restored in Myanmar and a democratically elected government is firmly in office, chosen by the popular vote of its citizens, we should not repatriate Myanmar citizens to a dangerous territory", the statement reads.
Christian Churches emphasize the teaching of mercy and compassion, central to the Christian faith: "As we live the Lenten season, we are called to spiritual introspection and to commit ourselves to performing acts of charity. What better way to live it if not by supporting the principle of the sacredness of life and dignity of all people, created, loved and custodians of inalienable rights", states the text. "An asylum seeker, a refugee or anyone whose life is in danger, should not be forced to return to Myanmar or to any other country where they may face persecution and even death in a conflict situation", the note continues.
The Malaysian Council of Churches, in its call to preserve the life, dignity and human rights of Burmese refugees, has received full support from the World Council of Churches (WCC), which has joined in calling for justice from the Malaysian Federation government and mercy for those who seek asylum and fear for their lives", in accordance with "international humanitarian law and fundamental human rights". (PA) (Agenzia Fides, 25/2/2021)

AFRICA/KENYA - "No to the forced return of refugees to their countries of origin"; the Bishops oppose the closure of the Kakuma and Daadab camps

AFRICA/ETHIOPIA - The "forgotten war" in Tigray: the testimony of the Salesians on the dramatic humanitarian situation

AFRICA/BENIN - The Church of Benin celebrates 160 years of evangelization

AMERICA/HAITI - In the face of kidnappings, common prayer and "national strike" of Catholic activities

AFRICA /D.R. CONGO - "Stop with the murders": appeal by the Bishops to stop the violence in the east of the country