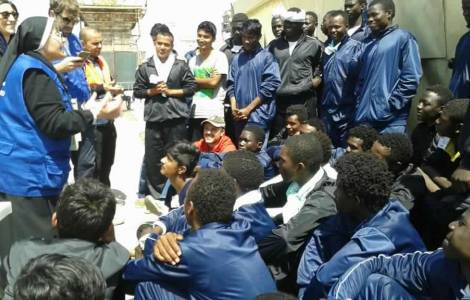 2021-03-11
The mission of the politician: a vocation at the service of national reconciliation and the construction of the common good

2021-02-24
Migrants: the many aspects of the mobility circuit in Central America

2021-02-15
Church and coronavirus pandemic: "We need the creative courage of St. Joseph"

2021-02-03
Consecrated life: "the potential of your charisms at the service of the People of God, overwhelmed by the pandemic"

Tijuana (Agenzia Fides) - The northern border of Mexico represents one of the main migratory corridors in the world, characterized by violations of fundamental rights and by a high risk for the lives of migrants, discrimination and xenophobia. However, migration to the continent is also the one that affects people from Central America, a phenomenon less often discussed. This is underlined by the dossier entitled "Mobility at the border: Tijuana as a space for (re) construction of life" published by CSEM, the Scalabrinian Center for Migration Studies.
The analysis carried out by CSEM researchers starts from Tijuana, a border town between the USA and Mexico where the Scalabrinian Missionary Sisters have created a model of reception in the Mother Assunta Institute. According to the note sent to Fides, the text analyzes Central American migration from a broader regional perspective, taking into account the differences that have affected the different states of origin. El Salvador, Honduras and Guatemala can be considered as nations that have mainly experienced emigration to the United States, while Belize, on the other hand, has the double characteristic of being both a country that welcomes immigrants from Central American but also a State which expresses an emigration towards the United States.
Nicaragua, on the other hand, is the regional exception, with strong signs of emigration towards Costa Rica while Panama has significant flows of emigrants towards the United States. Panama has important flows of migrants towards the USA, due to its historical and political condition with the federation and, now, it is a country which has partly changed its own reality and welcomes many immigrants. However, there are also migratory circuits internal to the region in Central America, which are facilitated by the Ca4 free movement program and by the use of the US dollar in El Salvador and Panama.
In this panorama the case of Mexico stands out to the point that now it is a question of a migratory circuit from Central America. The data for 2010 speak of the presence of 59,936 Central Americans in the country. Mexicans in the United States number 12 million with a peak in 2007 with 6.9 million as of that year.
According to the study of America, from 1970 to 2020 the socio-political context has changed. If in the seventies the type of migration was mainly political (due to the exile resulting from dictatorships and colonial regimes in Belize and Panama), emigration in the 1990s concerned people moving for economic reasons before the first environmental refugees and internally displaced people arrived in 2000s. Since 2010, however, America has been characterized by refugees, family, child and youth migration and migrant caravans.
The homicidal violence that characterizes some countries is particularly critical. The highest rate of this phenomenon concerns El Salvador with 58 homicides per 100,000 inhabitants on average from 2016 to 2019, followed by Honduras with 45 homicides per 100,000 inhabitants, and by Belize (36.5 murders per 100,000 inhabitants). The flow of financial resources from expatriates has a notable influence on Latin American economic systems. In El Salvador, they represent 24.5% of GDP, 20% in Honduras, 12% in Guatemala, 113% in Nicaragua, 5% in Belize and 2.7% in Mexico.
One of the most discussed topics was that of institutional violence. In 5 years, Venezuela has “expelled” 4.5 million people, in particular to Latin American countries. In 2014 alone, 2.3% of the Venezuelan population lived abroad and in 2019 this figure reached 16%. For the record, this is the second place in terms of emigration for a Latin American country since 25% of the Salvadoran population lives abroad and 10% of the Mexican population.
However, in the south of the continent, the study further indicates, "the inefficiency and rudeness of many public and private institutions exercise passive violence on the population". Today, "institutional impunity, systemic violence and neo-liberal poverty are the main causes of emigration". (SL) (Agenzia Fides, 24/2/2021)

AMERICA - Jesuit Refugee Service: Latin America and the Caribbean the areas most affected by the pandemic in the world

ASIA/IRAQ - Arab media: a "government committee" will work on suggestions that emerged during Pope Francis' visit