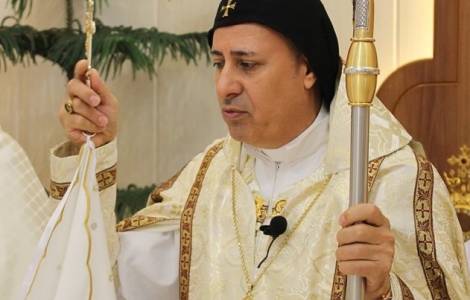 2021-03-05
Iraqis waiting for the Pope, bearer of hope for all through universal solidarity

2021-02-26
Chaldean Patriarchate: a prayer to entrust Pope Francis' trip "in the hands of the Lord"

Erbil (Agenzia Fides) - The Christian community which will welcome Pope Francis during his apostolic visit to Iraq "is poor, of reduced dimensions, without political influence, but it certainly constitutes a living Church, preserved in faith in the Lord Jesus, also made fruitful by the testimony of those who have gone through persecution. We are not waiting for the Pope's visit as a pretext to be compact: we await it as a sign that the Pope and the universal Church love us, and that there is a future for us too".This is what Archbishop Nathanael Nizar Samaan, at the head of the Syrian-Catholic diocese of Hadiab, in Iraqi Kurdistan, in the context of an interview with Agenzia Fides on the expectations and fervor with which Iraqi Christians await the arrival of the Pope as part of the apostolic visit scheduled for March 5-8.
The words of the Archbishop, a native of Qaraqosh, are free from complaints and accusations, rather they are based on faith, hope and charity.
"We Iraqi Christians" - assured Nizar Samaan, who returned to Iraq in 2019 after long years of pastoral service among the Syrian Catholic communities in Europe - "do not have our own 'agenda' that we want to bring forward during the Pope's visit. When we see that the Pope himself comes to us, this is a clear sign that we are not alone, that the Church loves us and this is enough for us. For us, it is a precious gift to move forward on our journey and continue the mission to which we are called in these lands. But also for others, for the whole world, it will be nice to be able to rediscover through the 'lens' of the papal visit that here there are living communities, which have every desire to stay here for the future, not to isolate themselves and to live in fraternity with Iraqis of other faiths, despite their own poverty and the small number of parishioners, the suffering and the many daily problems".
In the program of the trip, the Archbishop is mainly involved in the organization of the Mass that the Pope will celebrate on Sunday March 7 at Erbil Stadium. "This will be the only mass event on the program - the Archbishop explains to Fides - as all other meetings, including those in Baghdad and Qaraqosh, will have limited access. At the Franso Hariri stadium in Erbil, at least 10,000 people will participate in the Mass, knowing however that the stadium has a capacity of 30,000 people, but unfortunately the Covid-19 pandemic in Erbil has forced access to be restricted. At least half of those present will come from places in Iraqi Kurdistan such as Sulaimanyya, Dohuk and Ankawa, the suburb of Erbil where there are also many displaced people from Mosul and the Nineveh Plain. We have distributed the rest of the tickets among the dioceses across the country. The liturgy will be celebrated in the Latin rite, with songs in Arabic and Aramaic" .
"By preparing together the various moments of the visit - tells Fides Bishop Nizar Samaan - we have also experienced communion between us. We put aside divisions and differences, showing everyone that as Iraqi Christians we share the same mission of proclaiming the Gospel of Christ in our lands. Openness towards our Muslim brothers has also flourished from this communion, who are also awaiting Pope Francis with trepidation". (GV) (Agenzia Fides, 22/2/2021)

ASIA/IRAQ - Chaldean Patriarch Sako: it is wrong to expect that the Pope's visit will solve all our problems

ASIA/MYANMAR - Appeal of Catholic Bishops: peace and reconciliation through dialogue