AFRICA/IVORY COAST - New headquarters for the "Foundation Our Lady of Africa, Mother of All Graces", committed to faith and charity 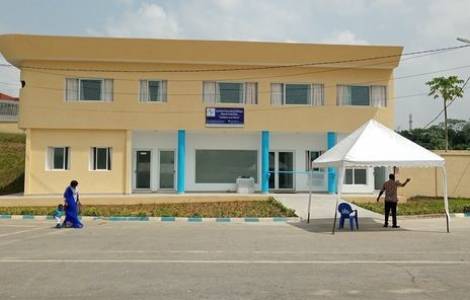 2021-03-08
Protection of minors and vulnerable people: a challenge for the Church

2021-02-10
New headquarters for the "Foundation Our Lady of Africa, Mother of All Graces", committed to faith and charity

Abidjan (Agenzia Fides) - February 2, 1987- February 2, 2021, the Marian Shrine of Abidjan is 34 years old. The celebration of this anniversary, Sunday February 7, 2021, was accompanied by the blessing of the headquarters of the "Foundation Our Lady of Africa, Mother of All the Graces" by Mgr. Marie-Daniel Dadié, Archbishop Emeritus of Korhogo who represented Cardinal Jean-Pierre Kutwa, Metropolitan Archbishop of Abidjan. This double event gathered around Jesus and the Virgin Mary, political, administrative, customary personalities and, of course, many pilgrims, sons and daughters of the Virgin Mary, for the Mass of thanksgiving.
The Foundation of Our Lady of Africa, Mother of All Graces, is an institution that will highlight the virtues of the Virgin Mary by placing itself at the service of the poorest. "The point is to be in solidarity with Mary. Because at a certain point when you pray to Mary, you have to go further. And it is by wanting to imitate Mary at all levels that we arrived at the creation of the foundation", underlines Fr. Eugène Adingra, Rector of the National Marian Shrine of Abidjan Attécoubé.
The creation of the foundation started from four biblical texts, which reflect the virtues of the Virgin Mary: "it is the announcement in which Mary is in solidarity with God's plan, in solidarity with humanity through her yes. During the visitation, Mary is very sensitive to every person who needs help, assistance. The wedding at Cana, "they have no wine", Mary is the one who was very attentive and realized that the couple had no wine, and she went to her son to ask him to do a few things. And we too, God uses us like Mary, to be providence, that is, to be there to give. At the foot of the cross, like Mary who is with Jesus, so we too are called to be with all those who feel rejected, left behind, the most deprived and those who need help, support", says the president of the Foundation Our Lady of Africa, Mother of All Graces, Father Eugène Adingra, who invited the devotees of Virgin Mary to join this foundation in order to respond to his vocation to live in a meaningful way the practice of the virtues of solidarity and charity in the image of the Blessed Virgin Mary.
The Foundation Our Lady of Africa, Mother of all Graces, created on February 17, 2018 at the National Marian Shrine of Abidjan Attécoubé, under the guidance of Fr. Adingra, Rector of the Shrine, who is its President, aims to support the mission of the Shrine through acts of consolation, charity and witness to faith. The Foundation works in the fields of religion, education, health and culture. Its immediate project is the construction of the parish of St. Peter the Apostle of Worofla, located 40 kilometers from Séguéla in the diocese of Odienné. (S.S.) (Agenzia Fides, 10/2/2021)

ASIA/HOLY LAND - Patriarch Pizzaballa celebrates the solemnity of the Annunciation in Nazareth: virtual Masses do not save us, but the encounter with Christ

AFRICA/BENIN - The Church of Benin celebrates 160 years of evangelization