ASIA/INDONESIA - Christians in Sumatra, protected by the central government and punished in the province of Aceh 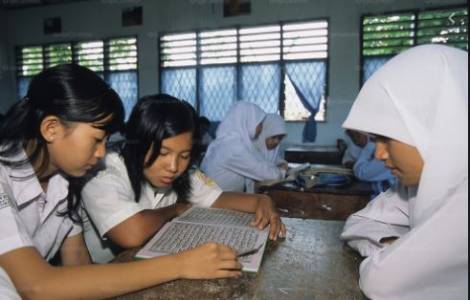 2021-04-09
"Everything is possible for those who believe": a Camillian missionary from the island hit by cyclone Seroja

2021-04-08
Floods in Eastern Indonesia: the campaign of compassion and solidarity is underway

2021-03-23
Towards the Day of Missionary Martyrs: Rufinus Tigau, a young catechist murdered without reason

Jakarta (Agenzia Fides) - While the central government promotes the rights of non-Muslim minorities and pays attention to the situation of Christians across the territory, in the province of Banda Aceh, in the far north of the big island of Sumatra, where the Islamic law continues to apply corporal punishment for acts considered immoral such as the consumption of alcoholic beverages, gambling, extramarital affairs or homosexual relations.
In recent days, the Indonesian government issued a decree banning the obligation to wear certain clothing for religious reasons in public schools, after the case of a Christian student from Padang, on the island of Sumatra, who was forced to wear the veil in class. The Minister of Education and Culture, Nadiem Magarim declared that religious clothing is "an individual's right, not a school's decision". Schools across the nation will have one month to repeal any regulations that go against the new law.
The measure seems to go in the direction of a containment of the Islamization of the state, which has returned to the center of the debate after the return to Indonesia of the well-known Islamic representative Rizieq Shihab. The latter often asserts in his speeches that Indonesia should abandon pluralism and that Muslims should impose their own rules on minority groups.
On the other hand, in the province of Aceh, two Christian men were publicly beaten for having committed acts considered immoral, such as drinking alcohol and gambling. The beating - also inflicted on five other Muslims - took place on February 8, less than two weeks after two men were severely beaten in public about 80 times for having homosexual relations, a practice prohibited by Sharia law, in force in the province. The two Christians received 40 lashes each from a Sharia officer, who hit them on the back with a flexible stick.
One of them said that he had chosen to be whipped to avoid imprisonment for up to six months: "The Sharia police offered us a choice and we chose the punishment based on 'qanun', a body of norms promulgated by Muslim rulers in particular on administrative, economic and penal law topics, promulgated by the authorities.
Aceh is the only province in Indonesia that applies Sharia the Islamic law. Non-Muslims who violate national law and sharia law can choose to be treated by any of the two systems. However, they rarely face the punishments provided for in the Sharia, criticized by many groups that promote human rights.
Human rights groups have denounced the practice of beating, calling it "cruel and inhuman" and Indonesian President Joko Widodo himself also called for an end to such corporal punishment.
"By choosing to stay and live in this province of Aceh, we must follow local regulations. We must not only respect the rules and regulations, but also appreciate the culture and lifestyle of this land", said Maria Agustina, a Christian living in Aceh, to Fides. "Beating is against human rights, but Aceh has obtained special and autonomous rights to administer its province", Agustina added.
In Aceh, Sharia law is applied to its fullest extent, with the exception of the death penalty. Its application is monitored by a special "moral police" which seeks out and denounces people who do not comply with the requirements and are accused of "corrupting society".
Based on the 2010 population census, 98.18% of the population of Aceh province are Muslim. The influence of Islamic religion and culture is very strong in the life of the local people. Beating of non-Muslims is rare: few people have been convicted and punished in recent years for crimes related to gambling and the sale of alcohol beverages.
Indonesia is a country with 270 million inhabitants, 230 million of whom are Muslims. There are 24 million Christians in the country, and among them 7 million are Catholics. (ES-PA) (Agenzia Fides, 10/2/2021)

ASIA/MALAYSIA - Judicial decision on the use of the name of Allah in Christian publications, "a victory of common sense"

ASIA/MYANMAR - Comfort to victims of violence and aid to the displaced: the mission of the Sisters of St. Joseph