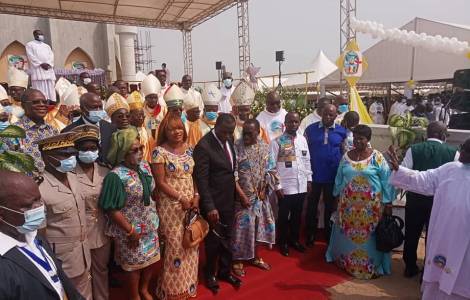 2021-02-10
New headquarters for the "Foundation Our Lady of Africa, Mother of All Graces", committed to faith and charity

2021-02-08
International Day of Fraternity for all people: "Peace is a highly spiritual value"

2021-01-27
125 years of evangelization in the country: "A path of reconciliation, peace and fraternity" acknowledges a representative of the Head of State

Grand-Bassam (Agenzia Fides) - "We have come to share with all the people of God the graces received from these zealous missionaries who brought the good news to Ivorian land. Today this good news should be a source of renewal of our faith, a source of charity that should inspire us to walk decisively towards reconciliation and knowing how to share, so that the Ivory Coast maintains its vocation to be the land of hope, the country of true fraternity", declared the Minister of Sport, Paulin Claude Danho, on behalf of the President of the Republic, Alassane Ouattara, on Sunday 24 January at the jubilee Mass for the 125th anniversary of the evangelization of Ivory Coast.
The Minister of Sport, on behalf of the Ivorian Head of State, wished "a happy jubilee to all the Catholics of Ivory Coast" indicating that the great message of the missionaries who have faced various vicissitudes to bring the Gospel is that "their missionary zeal should inspire us that, whatever the tribulations of life, we must go out to sea to bring joy, bring hope, bring faith".
Many have traveled from the four corners of the country to live the mass of thanksgiving to God for the jubilee of the 125 years of evangelization of the country in the Saint Esprit cathedral in Mockeyville Grand Bassam, more than 20 thousand lay faithful wanted to share this historic moment in the life of the Church .
"It was fantastic, I was here 25 years ago and I did not know that I was going to witness this jubilee. God has given us everything, so many priests in the Church of Ivory Coast", declared a faithful present.
The solemn mass for the jubilee of 125 years of evangelization in Ivory Coast was accompanied by the closing of the 117th plenary assembly of the Ivorian episcopate in Kodjoboué in the diocese of Grand-Bassam. The Eucharist presided over by Cardinal Jean Pierre Kutwa, Metropolitan Archbishop of Abidjan and concelebrated by the Apostolic Nuncio in Ivory Coast, His Exc. Mgr. Paolo Borgia, and his brothers in the episcopate brought together eminent political, administrative and religious personalities and obviously many faithful from all over the country. Cardinal Kutwa during his homily, after praising the work of the missionaries and inviting the Ivorians to live together, today entrusted to the Church one of the fruits of this jubilee: that of offering future generations an education at the service of human development.
"Education in Ivory Coast at the service of integral human development", was the theme at the center of the reflections of the Bishops during their 117th plenary assembly held from 18 to 24 January 2021. At the end of the meeting, the bishops of Coast Ivory made public the results of their work and delivered a message to the Church and the nation.
Addressing the rulers, the leaders of the political parties and the entire population, the Ivorian episcopate once again asked for peace, a peace without compromise. They therefore propose some solutions to achieve this, including the return of political exiles, the release of political prisoners, scrupulous compliance with the laws for the upcoming elections and the continuation of the political dialogue effort.
Pope Francis who did not want to remain on the sidelines of these events of the Church in Ivory Coast, joined the Catholics of the country through thought, prayer and a message delivered by the Nuncio Mgr. Paolo Borgia. The Pope asked the Lord to enlighten the bishops of the Ivory Coast to guide the people of God who have been entrusted to them, ensuring that the faithful never stop growing in faith and hope and continue to be a leaven of peace and solidarity for all the people of Ivory Coast. (S.S.) (Agenzia Fides, 27/1/2021)