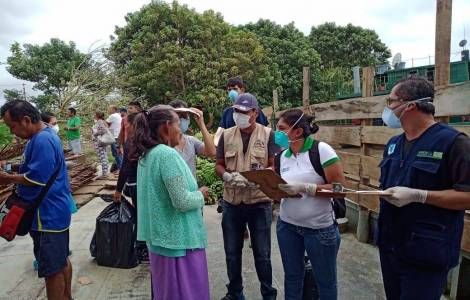 2021-03-27
The Bishops: "Together towards the Risen Christ, light in the night of the pandemic"

2021-03-20
Death of the Bishop Emeritus of Chimbote from Covid-19, known for his continual struggles of the marginalized

Loreto (Agenzia Fides) - The new variant of Covid-19 that appeared in Brazil and very strong in Manaus, capital of the State of Amazonas (see Fides 18/1/2021), has alerted the authorities in the Loreto region, in Peru. In recent days, three people have been evacuated from Caballococha, capital of the district of Ramón Castilla, due to serious complications caused by Covid-19 and unfortunately a woman died during the evacuation flight. As a result of this situation, on January 15, a proposal was presented to the Peruvian Executive to close the border between Peru and Brazil in Loreto, an area that includes the Lower Amazon and Yavarí, as announced by the regional governor, Elisbán Ochoa, in a statement broadcast by "Radio La Voz de la Selva". He also announced that the medical personnel of the armed forces will provide support to the institutions of health services (IPRESS) in the border area, coordinating with the Navy to monitor compliance with protocols in ports in the region. The head of the Loreto Public School Teachers' Union, Eleazar Pezo, reported that several teachers and citizens are currently receiving care at the health post in the area. In addition to this critical situation, a few days ago a boat was wrecked while it was carrying a medical team responsible for recharging the oxygen tanks. There were no injuries or deaths, but all cylinders were lost. It is feared that the constant commercial traffic with the Brazilian cities of Tabatinga and Benjamin Constant could contribute to the arrival of the variant of the virus in the Peruvian region. Meanwhile, from Santa Clotilde, on the Napo River, it is requested that the protocols are to be respected even on the boats that arrive in the area, since many travelers arrive without masks and without respecting social distances. This region of the Peruvian Amazon occupies the largest area among the mission territories of the Catholic Church in this country. The Peruvian region of Loreto represents a very special case in terms of contamination levels in that during the first wave of infection with Covid-19, it recorded no deaths. The situation is being analyzed, but many experts speak of herd immunity as more than 70% of the population has been infected. In this same region, the majority of the population claims to have been treated by resorting to phytotherapy.
The missionaries of the different religious congregations present in the area agree in affirming that the population has confidence in the protection of forest plants. Data collected carried out by REPAM staff reports on the protection from the vegetation in the area. "As mothers never abandon their children, so our plants protect us" says a mother. "Plants have protected us for years, from the climate, in the construction of our houses, through the wisdom of our grandmothers, with the elderly to teach us to purify ourselves internally, to heal ourselves", is the concept expressed by the population. "Thanks to plants, the virus found us with a strong immune system, able to face it in the indifference of a lagging and absent health system. Medicinal plants have been the response indigenous peoples have given to our communities and the world. Their correct and loving response at the same time denounces the urgency of a true intercultural model of health which values and respects the wisdom of our people, our memory, our history", explain the inhabitants of the region. (CE) (Agenzia Fides, 20/1/2021)

AFRICA/KENYA - "No to the forced return of refugees to their countries of origin"; the Bishops oppose the closure of the Kakuma and Daadab camps

AMERICA/BRAZIL - A missionary: "The Church accompanies the peoples of the Amazon on their path of joy and authenticity"