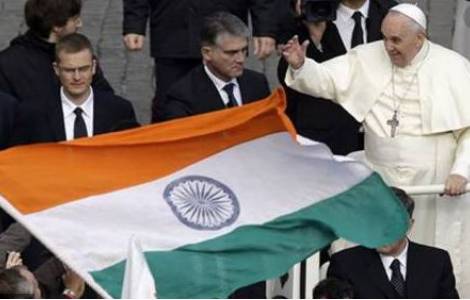 2021-02-08
#PrayAgainstTrafficking: "Women play an important role in the fight against human trafficking"

2020-11-12
Scalabrinians: the Covid emergency does not stop the tragedies in the Mediterranean

2020-11-10
Meeting between the Pope and the recently released Italian missionary in Mali, Father Pierluigi Maccalli, SMA

New Delhi (Agenzia Fides) - In a personal conversation with Prime Minister Narendra Modi yesterday, January 19, three Indian cardinals requested that the institutional steps be taken to invite Pope Francis to visit India. During the approximately 45-minute meeting, other topics and current challenges with which the Christian denomination in the country is confronted were discussed. Cardinals Oswald Gracias (Chairman of the Indian Bishops' Conference) George Alencherry (Head of the Syro-Malabar Church) and Baselios Cleemis (Head of the leaders of the Syro-Malankar Church) took part in the meeting with the Indian Prime Minister. "It was a dialogue on wide-ranging issues. We talked about the different areas of work carried out by the Church in India, at a national level, in particular about how Catholic institutions work in different fields of education, medical and social assistance. We discussed how the Church can collaborate with the government", said Cardinal Gracias on the sidelines of the meeting. According to Cardinal Gracias, "Prime Minister Modi generally welcomed the proposal to invite the Pope to India". The Prime Minister now needs to find an appropriate moment to invite the Holy Father in view of the current health and safety conditions in India", marked by the pandemic. According to Cardinal Gracias, the issue of peasants has also been raised and it is hoped "that a just solution will be found" and the Prime Minister declared that the government is making every effort for this. Another of the issues touched upon was that of the Jesuit Fr. Stan Swamy, arrested for his social commitment. As reported by Cardinal Gracias, the Prime Minister said he was aware of the situation, but noted that the government did not want to interfere at the moment as the case was being handled by an independent agency. During the muting, the Cardinals informed Modi on the extensive work done by the Church during the Covid-19 pandemic: the Catholic Church and its partner organizations have provided more than 15.2 million rupees to provide for the poor during the current pandemic. The various Caritas agencies have cared for over two million people in India. "We will continue to take care of the Indian people", remarked the President of the Bishops' Conference. Speaking of religious minorities (Christians, Muslims and others) in India, Cardinal Alencherry shared with Modi the reflection "on the necessary fair distribution of goods and services". In this connection he reminded the Prime Minister of the urgency of promoting religious harmony. The Prime Minister justified the controversial Foreign Contribution Regulation Act (FCRA), which the Cardinals referred to, and which affects the arrival of foreign funds to Catholic institutions and organizations, by saying that "so many organizations that receive foreign funds do not keep adequate accounts". Cardinal Cleemis called for the funds allocated by the federal government to be evenly distributed among the poor. The cardinals also raised the issue of the Dalit people at the meeting with the Prime Minister, with particular reference to the Christians of the Dalit community. "These are groups of people who need to be cared for and included in society", said the church officials, which was also confirmed by the Prime Minister, who welcomes the human and social advancement of the Dalits. In the Cardinals' view, the government must apply economic and non-religious criteria to measures to ensure equitable access for Dalits to education, social benefits and integration. Cardinal Gracias made it clear to Modi that "the Church is not politically active ... and always acts impartially". "What we want is good government, we seek care for the poor, economic growth and development of people, justice and the progress of the country", concluded the Cardinal. (SD-PA) (Agenzia Fides, 20/1/2021)

AFRICA/BURKINA FASO - The National Director of the PMS: "The recognition of the legal personality of the Church is a step forward for a fruitful collaboration"

ASIA/MYANMAR - Appeal of Catholic Bishops: peace and reconciliation through dialogue