ASIA/MALAYSIA - Diocese of Keningau opens the Year of St. Joseph, the saint who teaches trust in God 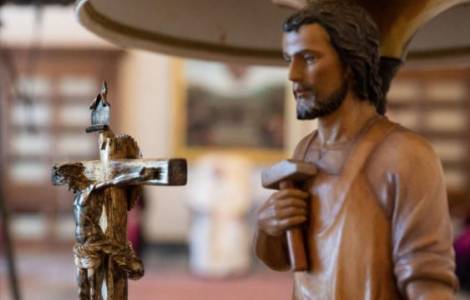 Keningau (Agenzia Fides) - In communion with the Pope and the universal Church, the Diocese of Keningau would like to celebrate the special year dedicated to Saint Joseph under the motto "WITH A FATHER’S HEART" (Patris corde). It is one of the first dioceses in Malaysia to join the initiative launched by Pope Francis who, on 8 December last, announced the Year of St. Joseph, to commemorate the 150th anniversary of the declaration of St. Joseph as Patron of the universal Church by Pope Pius IX.
As Agenzia Fides learned, Mgr. Cornelius Piong, Bishop of Keningau opened the year of St. Joseph with a special Eucharist at the Holy Family Pilgrimage Center. During the celebration, broadcast live on Facebook and Youtube, the Bishop thanked Pope Francis for the initiative of the Year of Saint Joseph. "It is very appropriate to proclaim the Year of Saint Joseph at this time to help fathers to follow Saint Joseph's example, strengthening their faith to embrace their vocation and mission as fathers", he remarked. Mgr. Piong also said he was inspired by Saint Joseph, a courageous and faithful man who had done his duty to protect Mary and Jesus. "By entrusting himself completely to the Holy Spirit, Saint Joseph was able to accept life as it is, with all its contradictions, frustrations and disappointments", he said. "Saint Joseph teaches us to trust God in happy or sad situations and makes us aware that God can make flowers sprout from rocky ground. As a father, Joseph had to face many hardships and difficulties", the Bishop said. "Joseph, who is the protector of the universal Church, is also known as a special patron of all those who have been forced to leave their homeland due to war, hatred, persecution or poverty", he continued.
The Bishop recounted his experience 40 years ago, when a group of Vietnamese was stranded in Kuala Penyu, the capital of Kuala Penyu district, in the province of Sabah, Malaysia. Their ship sank and they remained in Kuala Penyu for several months waiting for help. Many of them were Catholics and family men. "To express our closeness, I celebrated Mass with them and told them to remember Saint Joseph, who had become a migrant to protect Jesus and Mary. I urged them to always invoke him, especially in difficult moments, and to entrust their lives to this great saint", recalled the Bishop.
In the diocesan community, priests, religious and laity have welcomed the beginning of the Year of Saint Joseph. Pastoral and spiritual initiatives are planned, organized by the diocese but also by the parishes and ecclesial movements.
"The Special Year will allow Catholics to reflect on the role and responsibility that Joseph played for Jesus and Mary. We must pray to him and imitate his qualities in our lives", said Michel Tijon, a lay catholic. Demia Potong, a Catholic and mother, describes the Apostolic Letter of Pope Francis on the year of Saint Joseph as "a document suitable for all to contemplate and meditate".
The diocese of Keningau is located in Sabah, a state of the Malaysian Federation that occupies the northern part of the island of Borneo.
The Federation of Malaysia is a multi-ethnic, multi-cultural and multi-religious country. The population is made up of almost 32.7 million inhabitants, 60% are Muslims. Catholics represent 4% of the population. (SD-PA) (Agenzia Fides, 5/1/2020)

ASIA/KIRGHIZSTAN - Fraternity and spirituality in the name of St. Joseph