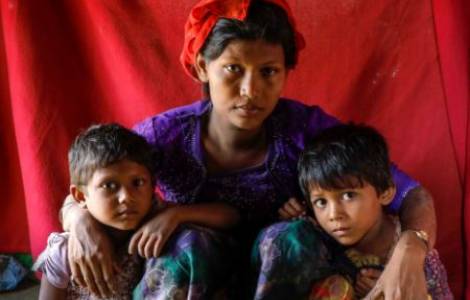 2022-06-13
The Bishops: prayer and action to face the political crisis and build peace

2022-06-02
Amnesty International: Serious acts of violence against the civilian population in the Burmese states of Kayah and Kayin

Yangon (Agenzia Fides) - In the new year there is hope for the Rohingya people, one of the most important Muslim communities in Myanmar, who so far have no citizenship, no peace and no hospitality. The Pope had words of deep compassion for them on his trip to Myanmar in 2017: "I ask the Rohingya for forgiveness, the presence of God today is also called Rohingya", while, in that year, the great exodus of the Rohingya to Bangladesh took place, where meanwhile more than 850,000 refugees live, who last emigrated to the neighboring country in 2017. In the last few weeks the government of Dhaka has begun to transfer some of the refugees to the island of Thengar Char (also called Bhasan Char), in order to ease the pressure on the refugee camps in Cox's Bazar, where they currently live. The repatriation to Myanmar, which has already been agreed by the two governments, has not yet started except for a few families and those who are trying to return illegally.
In recent months, the new electoral victory in Myanmar of the National League for Democracy of Aung San Suu Kyi, which for the first time included among its candidates two Muslims, now parliamentarians, has rekindled hope among these suffering populations. Today, the Rohingya also suffer from the exploitation and oppression of unscrupulous human traffickers who promise an end to torture in Malaysia or other "safe havens" where they are often victims of slavery.
But when did this all start and how many Rohingya still live in Myanmar today? It all began in 2012, when Sittwe, the capital of the Burmese state of Rakhine, home to at least 80,000 Rohingya, a third of the city's residents and about a tenth of the entire Rohingya community in Myanmar. The war between gangs, in the space of a few months - as reported in a 2013 report by the NGO "Pysichians for Human Rights" - ends with a toll of at least 280 deaths, about 135 thousand displaced persons and the destruction of over 10 thousand homes, dozens of mosques, madrasas and monasteries in the Rakhine state.
Since then, the tension has never eased and the intervention of the army has exacerbated the situation: in 2016, the Burmese army launched a new military offensive in Rakhine state after an armed group of the Rohingya, the ARSA (Arakan Rohingya Salvation Army), attacked some border military convoys of the Burmese army. The escalation culminated in the tragedy of 2017 when what observers called "ethnic cleansing" by the military led to the displacement of 700,000 Rohingya civilians to Bangladesh. Hundreds of people were killed and countless villages were destroyed.
As Fides learns, today only 4 thousand Rohingya live in Sittwe, about 5% of the Muslims who previously lived in Sittwe. From this Muslim ghetto neighborhood - surrounded by the destroyed remains of city mosques that have never been rebuilt and guarded by the police - one cannot leave and enter. The same happens for a community of approximately 130,000 Rohingya who are imprisoned as displaced persons in about twenty camps, most of which were built on the outskirts of Sittwe. Only Burmese personnel have access to the camps and therefore also the control of the health and psychological conditions of the displaced depends on the good will of the Burmese army.
"Human Rights Watch" recently described the refugee camps as "open-air detention centers" , where the displaced are "arbitrarily and indefinitely detained". In these camps, according to the NGO, the life of the Rohingya is that of those who live "under house arrest". "They are denied freedom of movement, dignity, employment and education" and live "without adequate supplies of food, water, health care or sanitation". (MG-PA) (Agenzia Fides, 4/1/2021)

EUROPE/ITALY - Scalabrini: "The image of a saint who knew how to understand and help, can maintain the hope of migrants and refugees"

AMERICA/BOLIVIA - The President of the Bishops' Conference: "We are building a world and also a country upside down"