ASIA/PHILIPPINES - In times of pandemic, "preaching and bearing witness to the Gospel are particularly important" 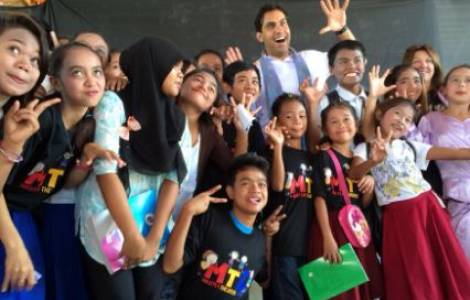 2021-01-30
General Assembly of Bishops: "sharing faith and resources, with generosity and co-responsibility"

2021-01-27
The Bible in every home and workplace: the Church's commitment in times of suffering

Manila (Agenzia Fides) - Today more than ever, in a time of suffering, uncertainty and loneliness caused by the pandemic, "it is now more necessary than ever to preach the Gospel with courage in daily life", said Mgr. Broderick Pabillo, Apostolic Administrator of the Archdiocese of Manila. As Fides learned, during the celebration of the Mass at the National Shrine of Our Lady of Guadalupe in Makati, Manila, on December 12, Mgr. Pabillo remarked: "Every baptized person should not be ashamed of proclaiming the work of God that has changed his heart and life. We must not be ashamed of proclaiming Christ in our words and in our service to others". Christians, he observed, "are called to live the faith inspired by the Gospel in society", also and above all in moments of general suffering caused by the ongoing pandemic.
The Administrator recalled that in 2021 the Catholic Church in the Philippines will celebrate the 500th anniversary of the arrival of the Gospel in the country. The Bishops' Conference has chosen "Missio ad Gentes" as the central theme for next year, and Mgr. Pabillo said in this regard that "the Virgin Mary is the model of mission".
The theme of proclamation and mission, which will be of central importance for the entire Church in the Philippines next year, was also underlined by newly-elected Cardinal Jose Advincula, Archbishop of Capiz. The Cardinal, according to a note sent to Agenzia Fides, urged the faithful to "become missionary disciples in the midst of the pandemic".
"There are many ways to be missionaries. Even though most of us are forced to stay at home, we can still fulfill our mandate to be missionary disciples", he said. "Through our words, our actions and our total commitment to the faith, we can all preach and witness the Gospel to others around us, at home, at work, in schools and in our small communities", explained the Cardinal. The Archbishop of Capiz remarked that the faithful should adopt a passive attitude and consider themselves only recipients of catechesis and instruction, but "they should give a joyful testimony of their faith". "Not only can we be disciples, we must be missionaries who are called to preach the good news of our salvation to others. Preaching the Gospel - underlined Cardinal Advincula - is not only the task of the clergy and consecrated persons or religious who preach from the pulpits, but also the role of the laity and of every baptized person according to their status. This missionary mandate comes from Christ himself and was lived by the first missionaries who arrived in the Philippines 500 years ago".
"Filipinos - he concluded - are known around the world for their devotion and deep Catholic faith. They are particularly known for migrant workers and missionaries who serve the Church in nearly 200 countries around the world where Filipinos are present". This capillary presence on all continents is a fruitful opportunity for the faithful for mission ad gentes in many different contexts around the world. (SD-PA) (Agenzia Fides, 14/12/2020)

ASIA/INDONESIA - The commitment of the Sisters of St. Charles Borromeo in the context of the pandemic