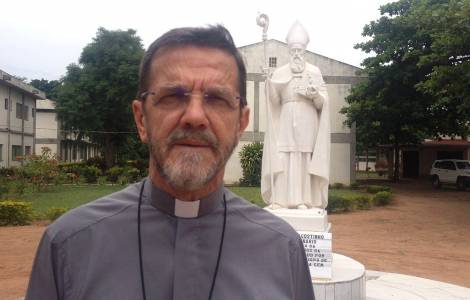 2021-01-15
Completely destroyed the Nangololo mission, occupied by the insurgents in October

2020-12-22
Appeal of the Bishop of Pemba to "act on the root of the conflict, namely the control of natural resources"

2020-12-09
Thanks to the donation of Pope Francis, 2 health centers will be built for the displaced people of Cabo Delgado

2020-11-19
Bishops close to over 500,000 displaced from Cabo Delgado because of the violence, launch an appeal for dialogue

Maputo (Agenzia Fides) - "The Southern African Catholic Bishops' Conference (SACBC) decided on a solidarity visit to the Bishop of Pemba from December 2 to December 4" said His Exc. Mgr. José Luis Ponce de León, Bishop of Manzini (Swaziland). SACBC brings together the Bishops of Botswana, South Africa and Swaziland. The SACBC delegation will go to the diocese, in northern Mozambique, in response to the multiple appeals for solidarity launched by the Bishop of Pemba, His Exc. Mgr. Luiz Fernando Lisboa.
Pemba is the capital of Cabo Delgado province, devastated in 2017 by an insurrection led by a group that declared itself affiliated with the Islamic State, which caused the death of more than 2,300 people and the displacement of at least 600,000 inhabitants.
At the beginning of 2020, Mgr. Lisboa had launched a dramatic appeal for international solidarity: "Our people urgently need peace because this crisis has completely destabilized our province. We call on the international community to come to our aid". He later made another appeal to help the displaced. "We need food, medicine, clothes, blankets, all the help is needed to help the displaced people".
The delegation to visit Bishop Lisboa will include Bishop José Luis, Bishop Victor Phalana of South Africa’s Klerksdorp Diocese, the SACBC Assistant Secretary General, Sr. Tshifhiwa Munzhedzi, and the Director of the Dennis Hurley Peace Institute, Johan Viljoen.
In September, SACBC members expressed their solidarity with the people of God in Cabo Delgado: "We have been following with increasing concern the rapidly deteriorating situation in the Diocese of Pemba, Cabo Delgado Province – the widespread violence, destruction of property, forced dislocation of over 200,000 people and loss of life".
Recently, Bishop Lisboa has intensified the appeals for solidarity. "It is a dramatic situation for the people fleeing the war, their villages, their islands. To give you an idea, in the past two days, the Muidumbe district has suffered seven attacks in seven villages. People are forced to sleep in the bush. Those who flee with boats spend up to 3, 4, 5 days at sea and arrive hungry and dehydrated", reported the Bishop of Pemba (see Fides, 9/9/2020). (L.M.) (Agenzia Fides, 25/11/2020)