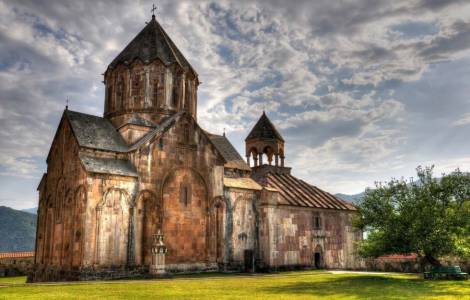 2021-01-28
Religious representatives appeal to politicians: "The people will not forgive, history will not be forgotten"

2020-12-15
Standstill in the formation of a government: Patriarch Younan recalls the shared responsibility of Christian politicians

Beirut (Agenzia Fides) - The agreement of 10 November which ended the bloody armed conflict in Nagorno Karabakh "does not ensure a clear and sustainable and long-lasting peace for the region", and the international community must also monitor the fate of churches and monasteries which represent "the soul and the stone" of this region, an area of historic settlement for Armenian Christians, today included within the borders of Azerbaijan. The alarm on the fate of the people and the churches of the region was raised yesterday by the Middle East Council of Churches (MECC), in a message entitled "Justice for Artsakh", thus taking again the Armenian name indicating the Nagorno-Karakakh region.
According to the MECC, the agreement reached is fragile and only manages for the moment to guarantee a "tense coexistence" without having "reliable bases" to ensure "a more lasting peace". In its appeal, the Ecumenical Council of Churches of the Middle East addresses "the parties concerned" and international institutions to ensure that a ceasefire is first of all guaranteed, in order to save the lives of thousands of people from danger. Furthermore, the MECC, which includes among its founding members the Armenian Churches, are deeply concerned with the religious freedom and practice of faith and with the fate of people who may be subject to all sort of retaliations "who may be subject to all sort of retaliations".
The fears expressed by the MECC also concern the fate of the Christian heritage, of churches monasteries, monuments and museums that "are currently, and may be, encountering destruction and even total removal from the map". In this respect, the MECC call upon all international organizations to become involved in protecting "the soul and the stone in Artsakh which has the right to self-determination like any other nation and people in the world". In its appeal, the MECC hopes that processes will be launched aimed at defining in this geopolitically troubled area "a new regional order that would benefit all parties involved in the present conflict".
After the cease-fire agreement obtained thanks to the decisive mediation of Russia, the respect of Christian places of worship and the need to preserve "normal ecclesial life" in the territories intended to be controller by Azerbaijani have been explicitly requested from Russian President Vladimir Putin to Azerbaijani President Ilham Aliyev during a telephone conversation: the Azerbaijani leader, for his part, guaranteed protection and free access to all the churches and monasteries in Nagorno Karabakh. Meanwhile, as reported by Agenzia Fides (see Fides, 18/11/2020), at the request of the local population, the Russian soldiers deployed as "peacekeepers" in the region, inaugurated a military garrison at the famous Dadivank Monastery (photo), in the Kelbecer area.
MECC, founded in 1974 in Nicosia and currently based in Beirut, aims to facilitate the convergence of Middle Eastern Christian communities on issues of common interest and to help the overcome confessional conflicts. About thirty Churches and ecclesial communities adhere to the MECC, representing four different "families": the Catholic, the Orthodox, the Eastern Orthodox (which also includes the Armenian Apostolic Church) and the Evangelical. (GV) (Agenzia Fides, 24/11/2020)

EUROPE/ARMENIA - Political crisis after the end of the conflict in Nagorno-Karabakh: Patriarch Karekin calls for the government to resign