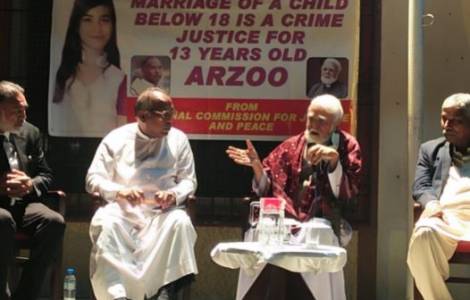 2021-01-12
Murder of two young Christians, killed for not wanting to give up their faith according to the pastor of their Protestant community

2021-01-09
Cardinal Coutts for his 50 years of priesthood: "God helps me to witness and announce the Gospel in Pakistan"

Karachi (Agenzia Fides) - "We are citizens of Pakistan and the law is the same for every citizen of Pakistan; it is the State's responsibility to ensure justice for its citizens. The issue of kidnapping, forced conversions and forced marriages should be dealt with on the basis of fundamental human rights, rather than making it a religious issue. It is the responsibility of the State to provide protection, to ensure justice to every citizen, without distinction of creed, culture, ethnicity and social class": this is what Cardinal Joseph Coutts, Archbishop of Karachi, declared in a meeting held yesterday November 19, at Saint Patrick's Cathedral in Karachi. The initiative was organized by the "Justice and Peace" Commission of the local Church, to discuss the case of Arzoo Raja (see Fides, 21/10/2020) and other Christian minors kidnapped, forced to convert to Islam and to marry their captors.
As Agenzia Fides learns, Cardinal Joseph Coutts said: "I appreciate all our Christian brothers and sisters who are committed to addressing and solving these cases of kidnapping, forced conversion and marriages of underage girls; I also appreciate the role of the people of civil society and their support to bring justice to young girls and their families". The Cardinal added: "I am grateful to Bilawal Zardari for his intervention in the case of Arzoo Raja. We appreciate the Medical Council, the judiciary, all political leaders and human rights activists for addressing the issue and stepped up to report the case of Arzoo Raja and support justice".
Cardinal Coutts observed: "Laws exist which recognize and punish such crimes. The culprits must be punished according to the law of the country: kidnapping someone, forcing a person to marry or to change religion is a crime punishable according to the laws in force".
The meeting was organized and moderated by Fr. Saleh Diego, Director of the Justice and Peace Commission and Vicar General of the Archdiocese of Karachi. Catholic priests, pastors of Protestant churches, Christian lawyers, human rights activists, minority rights promoters, lay people and citizens of other religions were present. All were urged to work together to promote justice and equal rights for all citizens, regardless of religion, culture, ethnicity.
Addressing an assembly of some 100 people, Fr. Saleh Diego said: "We must continue our efforts and work in unity, but at the same time we must avoid spreading unnecessary rumors and fake news about cases of kidnappings, forced conversions and marriages", warning against unconfirmed rumors that then lead to problems in real cases and situations.
Fr. Saleh Diego further stated: "We appreciate all those who have raised their voices through social media platforms, but we hope that these issues are not highlighted as religious issues. First of all we are Pakistani citizens and secondly we are a religious minority of Pakistan. We must support state officials, security forces and the judiciary so that they enforce the law and guarantee the rights of all". (AG-PA) (Agenzia Fides, 20/11/2020)

AMERICA/BOLIVIA - Bishops appeal to the new government: "Respect for the constitution is fundamental"

AMERICA/BRAZIL - Second wave of the coronavirus pandemic: Bishops of Amazonas and Roraima urgently ask for help