AFRICA/ETHIOPIA - Conflict in Tigray: Aid organizations warn of a humanitarian crisis in the Horn of Africa 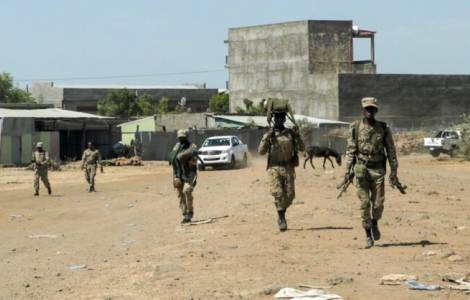 2020-12-14
Conflict in Tigray: fate of the bishop and his collaborators in the Eparchy of Adigrat

2020-12-09
The alarm of the African Bishops: "Stop the war in Tigray. We are concerned about the humanitarian situation"

Addis Abeba (Agenzia Fides) - There is a risk of a serious humanitarian crisis in Tigray. The fighting that broke out on 4 November between the troops of the Ethiopian federal army and the militias of the Tplf, the party in power in Macalle, have already caused hundreds of victims and forced at least 27,000 civilians to flee their homes to seek protection in Sudan. In addition more than 100,000 Ethiopian internally displaced persons and 96,000 Eritrean refugees are already living in four camps in Tigray.
"Whatever happens, a safe humanitarian corridor should be made possible for the care of humanitarian workers and refugees", said Andre Atsu, regional director of the Jesuit Refugee Service in East Africa. The fighting is delaying the arrival of humanitarian aid, including food and medicines".
According to Atsu, aid workers and refugees have been hard hit by the fighting after key roads were closed and severe fuel shortages. Electricity, internet connection and telephones were cut and banking services were also suspended.
"Some of our employees are not originally from Tigray and we fear for their safety if the situation escalates into ethnic conflict", added Atsu.
"There have been bombings, attacks and in some parts of the region there is even talk of massacres of the population - commented Mussie Zerai, an Eritrean priest of the eparchy of Asmara -. It is not confirmed, but it is feared that hundreds of people lost their lives in the clashes. All of this cannot be reduced to a simple matter of normal administration or an internal police operation. When you bomb with planes and shoot missiles, not only in the direction of Eritrea, but also in the direction of regions and cities like Gondar and Bahr Dar in the central part of the country, there is a risk that the conflict will intensify, with truly unpredictable consequences. The effects of these first weeks of war demonstrate this: there were only hundreds of deaths, but thousands of civilians had to flee to Sudan".
Catholic Bishops in East Africa also fear that the conflict could cause further deaths, displacements and destruction if urgent action is not taken. "Even if we believe that there is still hope that this conflict can be resolved peacefully and that there will be no civil war", wrote Mgr. Charles Kasonde, Chairman of the Association of East African Bishops' Conferences in a letter of solidarity addressed to the Ethiopian Church - "we are aware that this can only happen if there is political will to negotiate".
"This conflict is too much for an already martyred region that has paid a very high price for the wars of the past and also suffers from climatic conditions", concludes abba Mussie.
Recently there was also a plague of locusts that have devastated crops throughout the northern part of the country. When problems pile up on top of each other, they really risk losing that attempt to relaunch growth and development, peace and social cohesion. It must also be remembered that in the North, in the Tigray region, there are ninety thousand Eritrean refugees who at this stage run the risk of being trapped without an escape route between two fires if Sudan closes its borders, as feared. The humanitarian risk is very high. We appeal to the international community, and the United Nations in particular, to intervene vigorously to bring the warring parties around a table in order to find a peaceful solution without further bloodshed in a region of Africa that has already paid a very high price". (E.C.) (Agenzia Fides, 18/11/2020)