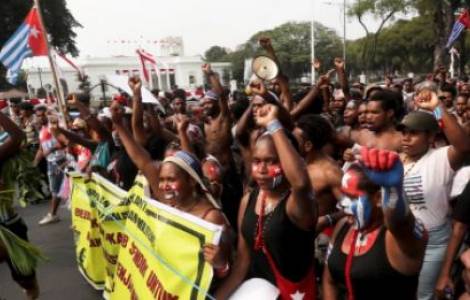 Timika (Agenzi Fides) - A group of Indonesian Catholic and lay associations sent a letter to the United Nations to involve the UN Commissions in charge of human rights and extrajudicial executions in the case of the murder of Rufinus Tigau, a Catholic catechist killed by the Indonesian security forces last October 26 in the province of Papua. The young man had gone, unarmed, in the direction of a patrol to ask for explanations about the shootings which were in progress in the village of Kampung Jibaguge (Sugapa district, Intan Jaya Regency, Papua province), but was killed.
As Fides learns, the involvement of the UN, in fact, could accelerate the possibility of seeing an independent investigation open to allow justice to be done to the family, following an episode that went unpunished. The case, illustrated by Agenzia Fides thanks to a detailed report from the local Church and religious orders in Papua (see Fides, 11/11/2020), continues to be discussed in Indonesia, also because no initiative was taken to identify those responsible .
In recent days, representatives of the Catholic Church in Indonesia met with the coordinating minister for political, legal and security affairs, Mahfud, at his residence. In addition to Cardinal Ignatius Suharyo Hardjoatmodjo, Archbishop of Jakarta and president of the Indonesian Bishops' Conference, there were also Mgr. Aloysius Murwito of the diocese of Agats and Mgr. Petrus Canisius Mandagi, newly appointed Archbishop of Merauke, Papua. The delegation expressed its concern about the spread of violence in the archipelago, stressing that often the military intervention has the sole effect of exacerbating the spirits, while the right path to resolve disputes should be through dialogue.
Father Martin Kuayo, Administrator of the diocese of Timika, reminds Fides that the case of Rufinus "is not the first case of violence that concerns the servants of the Catholic Church. On October 7, they also shot Agustinus Duwitau, another catechist. If we remain silent about these incidents - he added - I fear that things will get worse". Lay Catholics are accused of being members of the "Criminal Separatist Armed Group" (Kelompok Kriminal Separatis Bersenjata - KKSB), or of the West Papuan National Liberation Army (Tentara Pembebasan Nasional Papua Barat - TPN-PB), charges firmly rejected by the local church.
Local Christian organizations also report two other recent incidents in which Papuan Christian leaders were killed in unclear circumstances: Protestant Pastor Yeremia Zanambani was shot dead by soldiers of the Intan Jaya regency on 19 September 2020; a few days later, on 22 September, Pastor Albert Degei was found dead in the village of Kalisemen, regency of Nabire. (MG-PA) (Agenzia Fides, 17/11/2020)

AMERICA/BRAZIL - Strengthening hope, charity and mission in the context of the pandemic