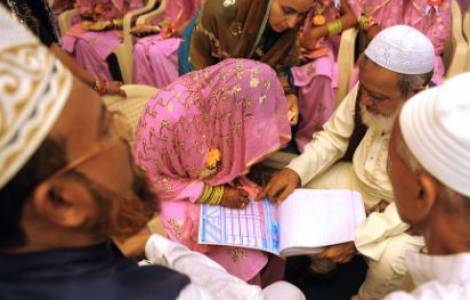 2021-01-12
Murder of two young Christians, killed for not wanting to give up their faith according to the pastor of their Protestant community

2021-01-09
Cardinal Coutts for his 50 years of priesthood: "God helps me to witness and announce the Gospel in Pakistan"

Karachi (Agenzia Fides) - "We welcome the decision of the Karachi Court to arrest the Islamic religious involved in forced conversion and in the religious celebration of illegal marriages, with minors belonging to religious minorities of Pakistan. In order to curb the forced conversions and illegal marriages of child brides, we await the severe punishment of all those involved in these cases". This is what Sabir Michael, Christian leader committed to fundamental rights and the rights of minorities, declares to Agenzia Fides, commenting on the decision taken by a court in Karachi against the Islamic leader who is also personally involved in the recent case of the Catholic girl Arzoo Raja, since he celebrated the Islamic wedding in agreement with his kidnapper (see Fides, 3/11 and 9/11/2020).
As Fides learns, the Karachi court issued an arrest warrant, without the possibility of bail, for Qazi Mufti Ahmed Jaan Raheemi, an Islamic religious accused of having celebrated the marriage of a Christian minor girl, Neha Pervaiz, kidnapped and forced to convert to Islam in April 2019. Neha Pervaiz managed to escape from her 45-year-old husband after a week in captivity. "Neha's family has filed a lawsuit against the kidnapper, the person responsible for the marriage rite and four other people involved in the kidnapping, forced conversion and illegal marriage of their daughter", says Michael.
The court order points out that, according to the Sindh Child Marriage Restraint Act 2013, marriage is only possible from the age of 18. The ruling further claims that the marriage of underage Neha Pervaiz was performed without her consent and under pressure, coercion and influence, in flagrant violation of Sections 3, 4 and 5 of the Sindh Child Marriage Restraint Act of 2013. The penalties provided include two years' imprisonment and a fine of 100,000 rupees or both.
Sabir Michael, President of the NGO "Peace Welfare and Development Association" (PWDA), says: "There is an urgent need to enforce existing laws and to punish those involved in forced conversion and illegal marriages of minors. The government must do everything possible, applying all means, so that such crimes, which disturb our society, do not happen". Michael recalls that this mufti "is involved in the recent case of Arzoo Raja, but also in many other cases of forced conversions and marriages of the kidnapped young minors . We hope that justice can take its course and that institutions stop, in accordance with the laws in force, people like Qazi Mufti Ahmed Jaan Raheemi who undermine interfaith coexistence in Pakistan and encourage the phenomenon of child brides". (AG-PA) (Agenzia Fides, 13/11/2020)

ASIA/INDONESIA - Churches and civil society groups: in the new year a common commitment to eliminate hatred and promote peace

EUROPE/ITALY - Minors: 3 immigrants out of 5 in Africa and Asia

ASIA/PAKISTAN - Appeal to the Prime Minister: protection of religious minorities from forced conversions

ASIA/KAZAKHSTAN - Family Christmas at the Ark Village, but generosity does not decrease