ASIA/INDONESIA - New missionary Bishop in Papua, Apostle of peace in a troubled region 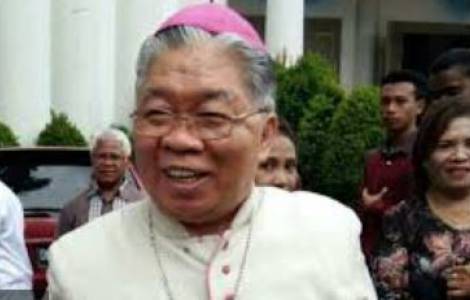 Merauke (Agenzia Fides) - Msgr. Petrus Canisius Mandagi, religious of the Missionaries of the Sacred Heart (MSC), is the new Archbishop of Merauke in Papua, a peripheral region of Indonesia, located in the western part of the island of New Guinea. His presence - hopes the local Church - will be able to bring a message and an action of reconciliation and peace in a troubled region, tormented by violence and separatist turmoil. Msgr. Mandagi, 71, had been Apostolic Administrator of the same Diocese for more than a year, while he has so far served as Bishop of Amboina, in the Moluccan Islands. In those islands, a sectarian conflict and generalized violence between Christians and Muslims shook the capital Ambon and other cities in the three-year period 1998-2001. In this context, Bishop Mandagi played a key role in helping to reduce the tension between the parties in conflict, especially by defusing the factor of potential religious conflict.
In an interview with Agenzia Fides, Father Terry Ponomban, a priest of Manado, in the province of Northern Sulawesi, appreciates the choice of Bishop Mandagi, praising his ability to mediate that will be useful in a tormented region like Papua, where there are misunderstandings and disputes between the local population and the central government of Jakarta. "Separatist issues and violence are shaking Papua. We expect that the choice of Bishop Mandagi, a man of peace and reconciliation, will generate benefits for society", stresses Fr. Terry.
Mgr. Mandagi has led the diocese of Amboina in the Moluccas since 10 June 1994. Born in Kamangta in Tombulu, in Minahasa, in the province of Northern Sulawesi in 1949, Bishop Mandagi lived in a Catholic family and two of his younger siblings are consecrated: one sister is a nun and one brother is also a religious of the Missionaries of the Sacred Heart. Ordained a priest in his hometown of Manado on December 18, 1975, after having completed his theology studies abroad, he was involved in the formation of the Major seminarians of the Congregation of the Missionaries of the Sacred Heart. Chosen by Pope John Paul II to lead the diocese of Amboina, he is now beginning his pastoral ministry in Papua, a region that currently includes five dioceses: Merauke, Agats, Manokwari-Sorong, Jayapura and Timika. (MH PA) (Agenzia Fides, 12/11/2020)

AFRICA/SOUTH SUDAN - Appeals from the Pope and other religious leaders: "Implement peace agreements and give South Sudan a functioning government"

AFRICA/IVORY COAST - The nation needs forgiveness and reconciliation: the Church alongside those who suffer