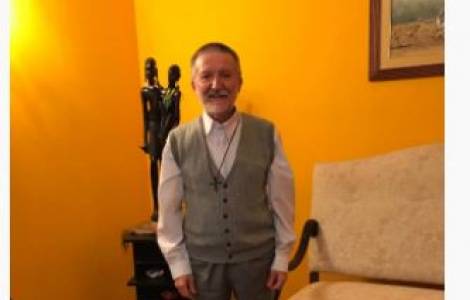 2021-03-10
Human trafficking: "The pandemic must not lead us to turn a blind eye to other problems"

2021-03-09
No school meals during the pandemic: Millions of children at risk of hunger all over the world

Rome (Agenzia Fides) - "It was a moment of great emotion. I never thought I would one day find myself face to face with the Pope, to be able to shake his hand", Father Gigi Maccalli told Agenzia Fides immediately after meeting Pope Francis at the Apostolic Palace. The priest of the Society for African Missions, released after two years of captivity in the hands of jihadists in Niger and Mali (see Fides, 9/10/2020), talked about this special meeting with the Pope with deep emotion. "He immediately put me at ease. I thought I would listen to his word, but he was very attentive listening to what I told him about this story which surprised me and that led me on this long two-year journey. I told him about the difficulties I encountered and above all the state of mind in thinking about those I had left behind: my family, the community from which I had been suddenly torn away and I asked him to pray, in particular for the community of Bomoanga and the whole Church of Niger which, even after my kidnapping, experienced difficult times, other attacks which resulted in deaths". "The Pope - underlined Fr. Maccalli - listened to me attentively like a true Father who listens to a son who comes from far away. His word was of encouragement. He himself underlined how much the period we are living now, in particular for Africa, constitutes an overflow of hatred and violence and how important it is today to bear witness to brotherhood. In this regard, I told him myself that, although I find myself in this situation, I do not have any resentment and I am serene. Of the young boys who looked after me, I said: they are just boys who do not know what they are doing.
I am convinced that our mission as missionaries in Africa and in the peripheries of the world is that of witnessing peace, brotherhood and forgiveness: the path of non-violence must know how to lead us elsewhere because it is not violence that makes this new world".
Pope Francis recalled the Document on Human Fraternity for World Peace and Common Coexistence signed on the occasion of his Apostolic Journey to the Arab Emirates in February 2019, "as a commitment between Islam and the Catholic religion, to seek alternative paths to this violence".
"Fr. Antonio Porcellato (Superior General of the SMA), who accompanied me to the Pope, also wanted to thank him for athe Encyclical Fratelli Tutti, because as missionaries we feel strongly supported by his statements.
I added that it is this daily dialogue that can make us brothers, letting go of the ideology, which so often distorts, and going more on the concrete, to live this relationship on a daily basis, by being attentive to the needs of people and communities. There we can find a ground of understanding and growth".
"Niger itself, where I come from, has always had good relations with these realities which are in the majority. Islam in Niger in fact exceeds 98% of the population. This wind of Islamism, like the term fanatic, leads to misinterpret and to live badly a reality with which we are called to coexist and to walk. This has always been done in some countries. The Pope himself underlined that in certain communities this is being lived and gave us the example of how during the Year of the Jubilee of Mercy, there were Christians who went to confession and others who went directly to the statue of Our Lady, the mother of Jesus, and to whom one asked: but you are Muslims and who replied: 'the jubilee is for us too, Mary is the mother of Jesus. We come and we support'. Can these relationships - asks Father Gigi - be the exception? I do not know. They can be the norm. We hope so, but if we sow peace, solidarity and dialogue can grow. In my own small way, the day of my release, I said to my mediator: may God give us the opportunity one day to make us understand that we are all brothers and he replied: 'no, a brother for me is the one who is a Muslim'. We know that it is necessary to sow widely and that the seed perhaps will grow in a way that it is not given to us to understand. Sowing fraternity, forgiveness and peace, I think that is our mission. The Pope encouraged us in this, reminding us that mission consists in being witnesses and not in proselytizing, a word that may sound strange and out of date, but for which we too must ask for forgiveness. Today, mission goes to other shores and the Pope encouraged us to bear witness to our Faith in this way".
"In response to the common prayer of the entire church community, which supported me, the Pope told me that I also supported the Church", concluded Father Macalli, "it is the cross that breaks the chains of hatred and violence, as Jesus did: He welcomed this annihilation, this human defeat. We know that this is the very heart of our faith, that it is only through the Cross that this new world is born. It was given to me to experience it through this captivity. I had the privilege of suffering with Jesus on the cross and of offering this suffering for this new world".
"For me, there was a return home - concludes the missionary - for other hostages there has not yet been one. I also asked the Pope to include them in his prayer. If you have experienced it yourself you know how painful and difficult it is to wait day after day for a new dawn. I said to myself, let's hope that it will happen tomorrow and that tomorrow came for me. I hope it comes for the others who are still in captivity". (GM/AP) (Agenzia Fides, 10/11/2020)