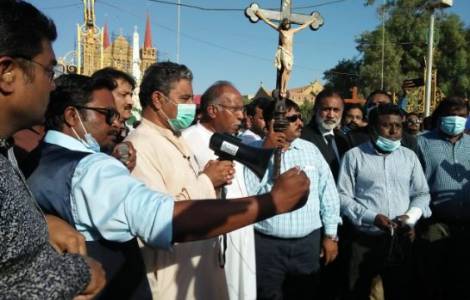 2020-11-30
Dowry prohibition: a burden has been removed from the shoulders of the poor

2020-11-27
The President of Signis Pakistan: "Mass media are instruments of peace and hope in times of pandemic"

2020-11-20
Cardinal Coutts: "We ask for respect for our rights as citizens of Pakistan"

Karachi (Agenzia Fides) - "We call on the authorities of the Sindh government, police officers and the judiciary for justice and a fair trial, as well as severe measures to be taken to stop the growing wave of kidnappings and forced conversions and marriages of young girls belonging to religious minorities in Pakistan.
At the moment, minority citizens do not feel safe and do not feel they have equal rights". This is what Cardinal Joseph Coutts, Archbishop of Karachi said in a message sent to Agenzia Fides, speaking about the case of the young Catholic girl Arzoo Raja, kidnapped, converted to Islam and forced to marry a Muslim man, in Karachi (see Fides 21, 22 and 24/10/2020)
Father Saleh Diego, Vicar General of the Archdiocese of Karachi and also at the head of the Diocesan Justice and Peace Commission, led a demonstration of more than 300 people including Christians, Hindus and Muslims at the entrance of Saint Patrick's Cathedral, yesterday 28 October. Fr. Diego said: "We ask for justice for the minor Arzoo Raja, who is only 13 years old. The court order that in fact legitimizes the kidnapping has saddened the Christian community in Pakistan. According to the order, the girl will have to live with her kidnapper and the police will guarantee their protection". Fr Diego informs: "The kidnapped girl has already been with her kidnapper for two weeks and the court ruled in favor of the kidnapper, which is terrible. To do it justice we will make all possible effort".
Arzoo Raja was kidnapped on 13 October 2020 by a Muslim man named Ali Azhar, who lived in the vicinity of the young Christian's home. On the day of the kidnapping, the young girl converted to Islam and married him.
The court order, issued on October 27, mentioned that Arzoo Fatima was initially a Catholic however, over time, she understood that Islam is a universal religion and asked her parents and other family members to embrace Islam, but they categorically refused. Arzoo subsequently accepted Islam out of her own free will and contracted a marriage with a Muslim man, Ali Azhar, her kidnapper.
The same order invites the police not to make any arrests in connection with the First Information Report registered under Article 364-A of the Pakistani Penal Code (i.e. kidnapping of a person under the age of 14). Indeed, the police are required to provide protection to the newly married girl.
Shema Kirmani, a Muslim and human rights activist, told Fides: "We strongly condemn such acts that are carried out in the name of religion. No religion allows anyone to be forced to convert and marry their kidnapper. This is kidnapping and rape". She adds: "According to the Child Marriage Act of the Sindh province, no one can be allowed to marry under the age of 18, the authorities must arrest and punish the culprits".
Ghazala Shafiq, Christian activist for human and women's rights, speaking to Fides remarks: "This court order accepts the forced conversion of Arzoo Raja, a 13-year-old girl. The judge did not even ask for her birth certificate to prove her age, and they did not allow her to meet her parents. This is an unfair order, in which priority is not given to the documents presented by the parents that prove the correct age of the girl". (AG-PA) (Agenzia Fides, 29/10/2020)

ASIA/KAZAKHSTAN - Exhibition on the 100th birthday of Pope John Paul II: "A Pope of Dialogue"

AFRICA/EGYPT - Egyptian Grand Mufti: political Islam has become "a nightmare" for Muslims and the whole world