ASIA/PHILIPPINES - The work of a missionary for street children in Manila, in times of pandemic 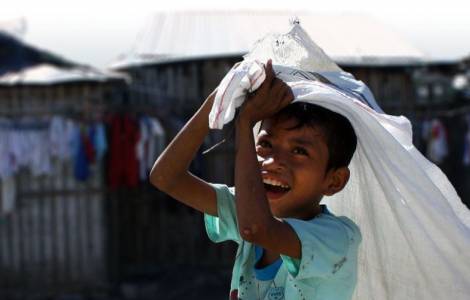 2021-01-18
Appeal of the Bishops of the Visayas: stop the killings of indigenous peoples

2021-01-16
The need to shed light on the unpunished massacre in Panay: the request of civil society and religious organizations

Manila (Agenzia Fides) - Giving back a future to the street children of Manila: this is the commitment of the "ANAK-Tnk" Foundation, a Catholic organization led by Fr. Matthieu Dauchez, French missionari, which seeks, accompanies and takes of the most disadvantaged children of Manila who live in the streets, in the suburbs or in the poorest areas of the capital. The name of the foundation lite rally means "child" (anak) while "Tnk" is the abbreviation of "tulay ng kabataa", in Tagalog language "a bridge for children".
Since 1998, the priest and his team of volunteers and staff have been helping children in need in the slums of Manila to reach them, helping to meet their basic needs: housing, education, food, health and other forms of help. We are trying to give them back a dignified life and a smiles on their faces", Fr Dauchez told Fides. The Foundation has already supported more than 50,000 children in its 22 years of existence and is strengthening its commitment as the pandemic upsets the nation. The organization takes care of children living on the streets, abandoned by their families and by society. They often live by begging, going in search of food in landfills and sometimes by prostituting themselves. These children are often victims of abuse, drug dealers and crime. "We support a path of education for each child, from the moment he joins our foundation until he becomes independent", said the priest.
In Manila, more than 40% of the urban population lives in conditions of extreme poverty and the pandemic has even worsened this situation. In addition, one out of ten children in the Philippines do not receive any education. "We seek to respond to the medical needs of each child and we offer training courses to local communities in order to integrate the concepts of basic health and hygiene", says the priest. In fact, one in ten children is malnourished and one in three suffers from growth delay. "We provide children with balanced meals on a daily basis and work to make communities aware of nutritional issues", continues Fr. Dauchez, referring to the work of the Foundation that continues in this difficult time of the pandemic.
Faced with phenomena such as drugs, violence, rape, prostitution, of which children are always the first victims, "we support children in need with psychological and legal aid, on the basis of our Charter for the prevention and protection of children", he says, thanks to groups of professionals and volunteers who look for children and invite them to the structures of the foundation to give them a new life.
"Working with these children has never been easy, it is a path full of challenges. At the beginning we offer material, emotional and psychological help. Some of the children reject these offers out of fear or lack of trust. They have been rejected by their own parents or their own families. They are deeply hurt. They prefer to stay on the streets, which have become their refuge. Building trust is the first step", he explains. The French missionary continues: "Children must be protected and cared for in a family atmosphere. Once they begin to trust, hope gradually rekindles in their hearts. Once this happens, they decide to leave the streets behind and take an interest in the activities of the Foundation. In the path of accompaniment, they elaborate healing, reintegration into society, acceptance of the past, hope for a better future", says Father Dauchez.
"The greatest challenge - he notes - is to bring these children, rejected and abused, to forgiveness, which is actually impossible for men, but it is possible thanks to God. Our mission is to prepare them so that the Lord heals the wounds of their heart. The greatest reward is to see children welcomed into the foundation, who become parents themselves and who show great love for their children", he said.
"ANAK-TNK" helps children to become aware of their human dignity as children of God and to learn new and better perspectives on life", he concludes.
One of the children who was helped, Darwin Ramos, is a candidate for the beatification of the diocese of Cubao, near Manila. During his visit to the Philippines in 2015, Pope Francis met about 300 children whom the Foundation has helped. (SD-PA) (Agenzia Fides, 27/10/2020)