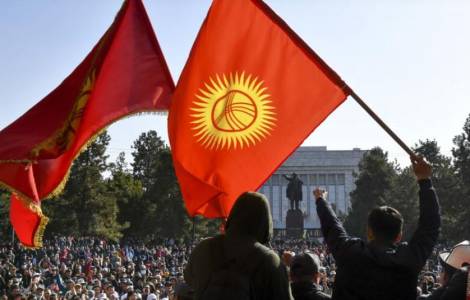 2021-04-14
"God loves the little ones": Young woman receives the sacrament of baptism in the Kyrgyz Church

2021-01-14
Pastoral Letter for the new year: "Christ is faithful to his Church and offers great opportunities for grace, in the challenge of the pandemic"

2021-01-11
Elections and constitutional referendum: the country towards presidentialism with leader Japarov

2020-10-23
Political crisis resolved with centralization of powers: people's expectations have been disappointed

Bishkek (Agenzia Fides) - "The protests that followed the parliamentary elections on October 4th in Kyrgyzstan are against the obvious buying of votes, this time more than in the past: in the days leading up to the elections, it was possible to witness how much we have moved towards corruption. In addition, the high 7% threshold of the Kyrgyz electoral system meant that only four of the sixteen parties that applied for elections could get into parliament. These are, of course, the four parties that are close to the elected president. This situation, in a system already in turmoil, caused the protest to explode", said Davide Cancarini, researcher and expert on Central Asian politics, explaining the reasons behind the Kyrgyz crisis on the first days of October.
In the hours following the election, evidence of electoral fraud led a large group of protesters to take to the streets in Bishkek, the capital of the Central Asian country, demanding the cancellation of the election, in which pro-Russian Sooronbay Jeenbekov was proclaimed winner. Demonstrators occupied government buildings and released detained politicians, including former presidents Almazbek Atambayev and Sadyr Japarov, later appointed prime minister and president. The police reacted to protests with tear gas and deafening grenades. According to the Kyrgyz Ministry of Health, one person was killed and 590 injured in the clashes.
The protests subsided ten days after the elections when Prime Minister Kubatbek Boronov, Parliament President Dastanbek Jumabekov and President-elect Jeenbekov resigned from their posts. However, this led to the centralization of powers in the hands of Sadyr Japarov, who after his appointment as Prime Minister, now also holds the role of President. According to the Kyrgyz constitution, the tasks of the president must be carried out by the president of parliament until a new head of state is elected. If the latter is unable to do this, the powers are transferred to the Prime Minister. Cancarini explains in this regard: "I believe that the solution we came up with basically betrays the demands of the protesters who took to the streets to ask for the democratic system to be more open. In fact, Japarov is a very controversial figure who is not supported by a large part of the population. When the protests broke out, he was in prison for the kidnapping of an officer. In addition, he is closely related to the Matraimov clan, which is known to be associated with Kyrgyz criminal organizations. Therefore there is now a controversial figure in power who is not much loved by the people: this was certainly not the scenario the demonstrators had envisioned when they took to the streets".
Since the fall of the Soviet Union until today,there have been two other crises in Kyrgyzstan: the so-called "Tulip Revolution" of 2005 and the "Second Kyrgyz Revolution" of 2010. On both occasions, the population took to the streets to protest against corruption. and poverty, and managed to oust the presidents in office, but this does not lead to an actual improvement regarding the conditions in the country.
According to the Asian Development Bank, 22.4% of the population in Kyrgyzstan live below the poverty line. This is the context in which the small Catholic community lives: about 1,500 believers who are committed to charity and education and whose projects focus in particular on young people from poor families and rural villages.
The Catholic community is currently organized in three parishes in the cities of Bishkek, Jalal-Abad and Talas, but many small communities are distributed in the rural areas of the country as well. Local Catholics can count on the spiritual assistance of seven priests, a religious and five Franciscan sisters.
In 1997, John Paul II founded the Mission sui iuris, as was the case with the neighboring states of Central Asia. In 2006, Benedict XVI elevated the circumscription to the rank of apostolic administration. In addition to the Muslim majority, 7% of the population is of Christian faith, of whom 3% of Orthodox faith. Jews, Buddhists and other small minorities make up about 3% of the population. (LF-PA) (Agenzia Fides, 23/10/2020)

AMERICA/BOLIVIA - The service of Catholic education in society: a contribution to the common good