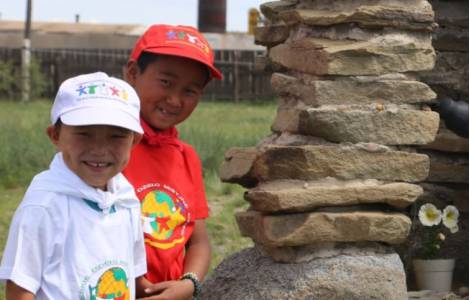 Vatican City (Agenzia Fides) - "Children and young people are protagonists of the missionary month and of missionary animation in the whole world. They are the young missionary disciples who evangelize, through prayer and the testimony of Jesus in schools, in their own homes, in places they frequent with their peers". This is what was said by Sister Roberta Tremarelli, Secretary General of the Pontifical Society of Missionary Childhood, one of the four Pontifical Mission Societies which, present in more than 130 countries, works with the motto "Children evangelize children, children pray for children, children help children all over the world". The Society, also known as the "Pontifical Society of the Holy Childhood" (POSI), proposes to accompany children, young people, adolescents, in the development of a missionary spirit, helping them to share faith and material means, especially with the most needy children.
During the month of October, traditionally dedicated by the Church to missions, "this animation reveals itself as an instrument of growth in the faith, also from a vocational perspective", remarks Sister Tremarelli. "All the baptized are called to give the Gospel, regardless of their age", continues Sister Tremarelli, reporting that in many countries of the world "young people have embraced the Pope's message for World Mission Day, saying: here we are, send us, young missionaries".
Sister Roberta cites countries such as Peru "where the missionary animation of the local community has been strengthened by the prayer and witness of faith of children and young people". Their presence in the Church, notes the Secretary of POSI "is important because children are educated to broaden their horizons to others, to those in distant lands. And, when they become young or adult, this seed, through the work of the Holy Spirit, will sprout and give them a heart and a look towards others, open to the challenges of the mission".
In particular, this time marked by the pandemic, has challenged, in many countries of the world, the Society of Missionary Childhood and animation has often resorted to new technologies, since many of these children are "digital natives". "In India - reports Sister Tremarelli - the local section of POSI has been raising awareness since September, posting a video every day on Internet channels and social media to make known the social reality of childhood in a given continent. In October the animation continued by encouraging prayer and the material collection of aid for the peoples and especially for the poorest and most needy children of that given continent".
Sister Roberta also recalls the work of formation carried out by POSI on digital platforms such as 'Zoom', which have helped to make the children feel close, even if local conditions did not allow it, given the restrictions imposed by the pandemic: "This has been the case, for example, in countries such as Honduras, but also in Zambia and Malawi in Africa ", she notes
A last, but not secondary aspect, concerns the evangelization of families: "Promoting prayer, formation, missionary awareness with children is an opportunity to reach their families. All over the world, young people involve their parents in missionary initiatives and this is a very important aspect, which helps to renew and revive the faith of adults, within the whole Catholic community".
"POSI - she remarks - aims at a personal and community involvement in order to make children feel part of a family where everyone is important and everyone helps each other. This is the current pedagogical challenge: to open the heart to universality, to contribute to the salvation of their peers". The General Secretary explains: "There are three concrete ways in which this involvement is expressed: prayer, offering and sacrifice. The children of Missionary Childhood pray every day for other children and for the spread of the Gospel message. The collection then is the fruit of the sacrifices of the children: Everyone does their part to give a better future to the children of the world. Thanks to these aids, many children can know Jesus and his Word, eat, study, have a roof under which to sleep, Finally, there is the missionary witness: with their behavior and their message the young missionaries are witnesses and example of life for their peers and for the whole community".
The Pontifical Society of Missionary Childhood was born when, in the mid-nineteenth century, French Bishop Msgr. Charles de Forbin-Janson was struck by the news that came from the French missionaries in China about the many children who died without having received baptism. Regretful for not being able to leave personally as a missionary, he asked Pauline Jaricot, foundress of the Pontifical Society for the Propagation of the Faith for advice. The exchange of ideas between the two was enlightening and the Bishop had the idea of involving the children of France so that, through prayer and material collaboration, they could help their Chinese peers. "One Hail Mary a day, a penny a month" to cure a child and save his soul: this was the commitment proposed by the Bishop of Nancy to French children. It was May 19, 1843 when, with this initiative, the seed from which the Missionary Childhood Society would sprout was sown. Years later the motto "children help children" was coined, which sums up the intuition of the founder and the charisma of the Society.
In a short space of time, many other countries joined the project. On May 3, 1922, Pope Pius XI recognized the Society as Pontifical, while on December 4, 1950, Pope Pius XII instituted the "World Day of Holy Childhood", declaring Epiphany as the date of celebration, but giving freedom to every nation to adapt the date to local needs. (PA) (Agenzia Fides, 21/10/2020)

ASIA - Commitment of Catholic mass media in Asia for the promotion of peace, truth and solidarity in times of pandemic