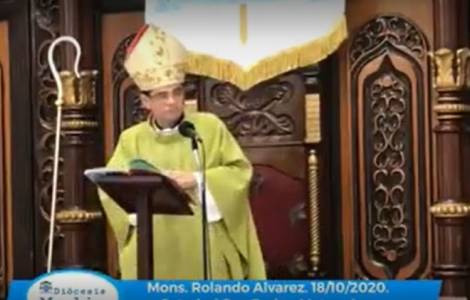 2021-01-12
"Politics is not the simple art of managing power, resources or crises", warns Bishop Álvarez, in the face of the increase in violence

2020-11-05
Towards the presidential elections with a divided opposition: Bishop of Matagalpa asks for more humility

Matagalpa (Agenzia Fides) – Mgr. Rolando José Álvarez, Bishop of the diocese of Matagalpa, in his homily on Sunday, October 18, indicated four fundamental elements which must contribute to the "moral" construction of Nicaragua: the family, the freedom to decide on one’s own authorities, the dignity that citizens should have and social justice, represented by respect for human life.
The Bishop once again called on government authorities, officials and the opposition itself to inform about how they are working for the well-being of the population. Mgr. Álvarez urged these sectors to follow the example of the English politician, writer, humanist, revered by Catholics, St. Thomas More, who distinguished himself for practicing good and justice, putting the common good first and not his personal interests.
The Bishop asked the State "to respect the popular will and share with a citizenship confident in its own capacities and potentials and in the importance of its own actions and decisions". "It cannot be otherwise, human dignity, family, freedom and social justice offered as natural gifts to man not only embody rights, but the responsibility that the State and society must fulfill, such as the urgent social commitment to the most vulnerable, the poor and the unprotected. If one of these pillars fails, the building collapses!" he concluded.
The country is experiencing further strong tension due to the latest legislative proposals (see Fides, 1/10/2020). The government has started to enforce the new “Law on the regulation of foreign agents”, depriving a Colombian priest, Father Luis Arilio Carrillo, of his residence permit, who worked for four years in the Diocese of Esteli under the leadership of the 'Ordinary, His Exc. Mgr. Abelardo Mata. The priest in question, a member of the Missionary Institute of St. John Eudes, had to leave the country on 16 October. At an international level, the annual session of the General Assembly of the Organization of American States (OEA) which deals in particular with the situation of fundamental rights in Nicaragua begins. There is also a non-immediate possibility of expulsion of Nicaragua from this international organization in that it does not respect the directives. In addition, it is likely that economic sanctions will be taken by the United States and the European Union following the lack of respect for fundamental rights in this country. (CE) (Agenzia Fides, 20/10/2020)

ASIA/INDIA - The analysis of a Jesuit:"A negative year for human rights in India"

ASIA/BANGLADESH - The new Archbishop of Dhaka: priority to be given to the family, the “powerhouse” of the Gospel