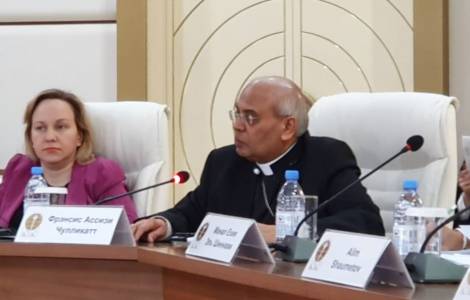 2020-09-24
The first basilica in Kazakhstan: "Here the roots of the Church that went through Soviet repression"

2020-09-02
Fight against Covid-19: thanks to the Church, a partnership between Italian and Kazakh hospitals has begun

Astana (Agenzia Fides) - The Pontifical Council for Interreligious Dialogue and the Kazakh Center for the Development of Interfaith and Inter-civil Dialogue 'Nursultan Nazarbayev' (NJSC) have signed a Memorandum of Understanding that "will open up new opportunities and more promising ways for the implemention of common projects, to promote respect and knowledge among the representatives of different religions". This is what a note sent to Agenzia Fides by the Catholic Bishops' Conference of Kazakh Bishops reports.
The signing took place on October 15 as part of a videoconference attended by the President of the Pontifical Council for Interreligious Dialogue, Cardinal Miguel Angel Ayuso Gixot, from Vatican, and Ambassador Altai Abibullaev, Chairman of the board of Directors of the NJSC, from the Kazakh capital Nur-Sultan. Also the representatives of the Catholic Church in Kazakhstan were present: Apostolic Nuncio Mgr. Francis Assisi Chullikatt, the Secretary General of the Kazakh Bishops' Conference Mgr. Athanasius Schneider, the Secretary of the Apostolic Nunciature in Kazakhstan Fr. Przemyslaw August Lewinski, and the press officer of the Episcopal Conference Piotr Pytlovani.
As reported in the press release sent to Fides, "the parties underlined the importance of this step for the further development of friendly and institutional relations between the Vatican and Kazakhstan, recalling the importance of promoting interreligious dialogue through initiatives such as the Congresses of the Heads of World and Traditional Religions, organized every three years by the Kazakh government".
On October 17, 1992, Pope John Paul II issued the brief "Partes Nostras", a document with which he established the Apostolic Nunciature of the Kazakh state. The date marked the beginning of a journey of mutual knowledge and collaboration, as witnessed by the three official visits of former President Nursultan Nazarbayev to the Vatican (which took place in 1998, 2003 and 2009), but above all the pastoral visit of John Paul II in Kazakhstan in September 2001. On this occasion, during a meeting at the Eurasian University of Astana, Pope Wojtyla described Kazakhstan as a "land of encounter, of exchanges, of novelties; a land which stimulates in everyone the interest for new discoveries and leads to experience difference not as a threat, but as an enrichment".
Since its independence from the Soviet Union, freedom of worship and interreligious dialogue have been one of the pillars of Kazakh politics. Nursultan Nazarbayev, at the head of the country from 1990 to 2019, has always promoted freedom of religion as an instrument of harmony and "unity in diversity", making, over the years, one of the successes of its policy. In fact, immediately after the dissolution of the Soviet Union, the economic crisis and the deterioration of state institutions could have been a catalyst for an inter-ethnic conflict, as was the case in neighboring Tajikistan. "Kazakhstan, on the other hand, managed to avert this harmful scenario through a far-sighted policy that saw the imposition of two 'cults': a public and dominant one, linked to loyalty to the State, to the law and to the personality of Nazarbaev; and a private one, strictly linked to religion and ethnicity", explained to Agenzia Fides Giannicola Saldutti, associate researcher at the Institute of Advanced Studies in Geopolitics and Auxiliary Sciences, based in Rome. This model - proposed over the years to respond to the need to control the growth of Islamic fundamentalist groups – seems to have been fully taken up by Nazarbayev's successor, Kassym-Jomart Tokayev, as confirmed by the memorandum of understanding with the Vatican.
In Kazakhstan communities of different nationalities and religious denominations live together. According to official data from the Kazakh Ministry of Foreign Affairs, out of 17 million inhabitants, 70% are Muslims, 26% are Christians, 1% of whom are of Catholic faith. (LF-PA) (Agenzia Fides, 19/10/2020)

ASIA/PAKISTAN - The President of Signis Pakistan: "Mass media are instruments of peace and hope in times of pandemic"

ASIA/INDONESIA - Indonesian Bishops: it is urgent to eradicate terrorism and do justice, for the prosperity of the Country

ASIA/PAKISTAN - Christians in Pakistan: caricatures of the Prophet Mohammed and offenses against religions sow hatred in the world

AMERICA/PERU - "Christmas is sharing": Caritas campaign for communities suffering the consequences of the pandemic

AFRICA/ETHIOPIA - Humanitarian agencies mobilized to help the populations of Tigray